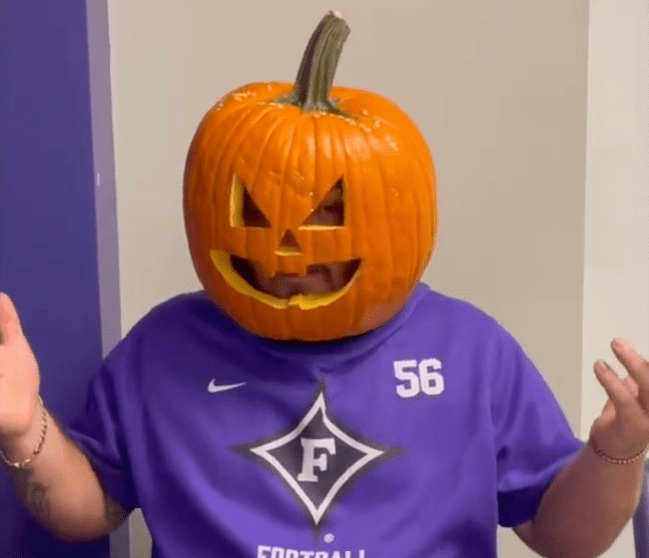 When it comes to television, The Office is one of the most universally-loved shows in history. All nine seasons of the show are hilarious, but the first seven seasons are undeniably funnier than the last two.

With that being said, one of the most iconic scenes in the show’s history comes in the final season. During episode 5 of season 9, “Here Comes Treble,” Dwight tries to play a prank on the office for Halloween.

To do so, he puts a pumpkin on his head and goes around scaring his coworkers. However, after having his fun, the pumpkin gets stuck on his head.

Jim and Dwight go through exhaustive efforts to get it off before eventually giving up, even toying with the idea of smashing it with a bat. It’s hilarious.

With Halloween coming up this weekend, Furman football decided to put their twist on the scene. Nose guard Cameron Coleman plays the role of Dwight and his team tries to help him get it off— even contemplating a chainsaw to get it off.

Take a look at the parody:

This is not the first time that a college football program put their twist on the classic Halloween scene. Clemson football did a phenomenal job of mirroring the scene last year.

Clemson’s video and production budget is slightly (significantly) higher than that of Furman’s so the quality is much higher, but part of what makes Furman’s so funny is the simplicity.

Here is Clemson’s remake alongside the original scene:

Who did it better:

Dwight and Jim or @ClemsonFB? pic.twitter.com/oGnHAKZU8K

Regardless of who did it better, Furman did a phenomenal job of getting in the spirit of the holiday and offered yet another public service announcement on Halloween safety. Don’t get your head stuck in a pumpkin, kids!