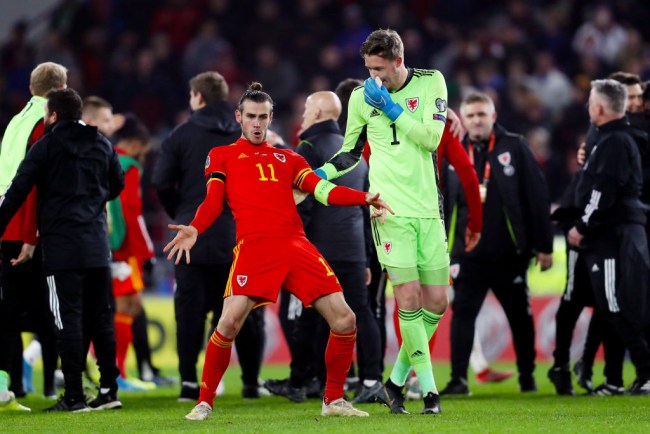 Wales punched its ticket to Euro 2020 with a 2-0 win over Hungary on Tuesday and while that’s a story within itself, the real story of the night came after the game during the team celebration.

Gareth Bale, who of course plays for Real Madrid, posed with a flag that read ‘Wales. Golf. Real Madrid. In that order.’ According to AS, the flag was made by a group of Welsh fans and according to me, the flag is incredible.

The flag stems from a couple of things. The first being just how poorly Bale has been treated over the past few years, he has seen just seven matches of game time in a Madrid shirt this season and isn’t necessarily looked at as a consistent option at this point. He also was reported to move from Madrid to the Chinese Super League this past summer, but Madrid canceled the move in the final moments.

Bale has also recently come out and said that he enjoys playing for Wales more than Real Madrid calling it more exciting.

Back in October, The Montenegrin wrote that Bale’s priorities right now are ‘Wales, golf and after that, Real Madrid’ hence the sign. In case you didn’t know, Bale is a massive golfer and actually has an extremely impressive three-hole course in his backyard modeled after some of the most famous holes on the planet.

As you would imagine, Spanish and La Liga media weren’t thrilled about Bale’s decision to celebrate with a sign pretty much shit-talking Madrid and how they’ve fallen to the wayside of the left-footed speedster.

Madrid as  a club has already come out and said it was a ‘joke in very bad taste’ while Madrid Sports simply called it ‘unforgivable.’ MARCA even published a piece titled ‘Bale will never be a Real Madrid legend.’

The thing is, it’s pretty clear that Bale simply doesn’t give a damn.

He’s a 30-year-old guy that is getting paid 350,000 euros a week, has scored over 100 goals for Real Madrid and scored in a Champions League Final en route to a trophy just to name a few things he’s done for the club.

He’s done his work at Madrid, and still has some game left in the tank despite Madrid not really recognizing that. Bale being honest and celebrating with his fellow countrymen and poking fun at Madrid is simply a brilliant joke we don’t see too often against the biggest clubs in the world.

Spanish and soccer media are going to do their job, some will go against Bale while some will be for him and I’ll very happily fall into the latter camp.

Mark is a New York City-based writer and editor at BroBible. You can find him on Twitter @MarkAndHisWords.