Gary Woodland Shows Some Serious Stones As He Holds Off Brooks Koepka To Win U.S. Open 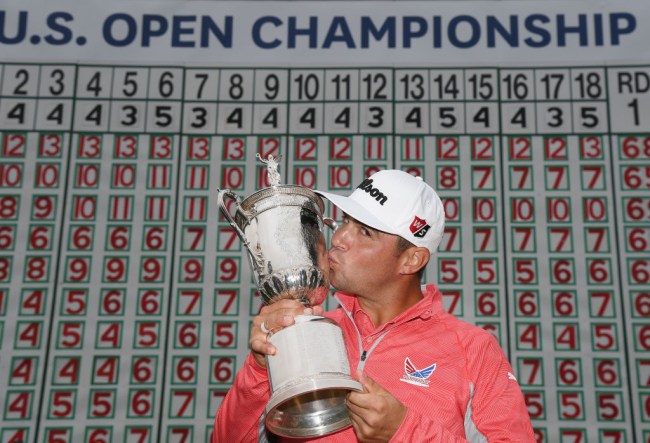 Everybody knew that it wasn’t going to be easy for Gary Woodland on Sunday at the U.S. Open as the odds, at least on paper, weren’t on his side.

Oh, and let’s not forget, Woodland had been a 54-hole leader seven times previously in his career, but in all seven tries never earned the win.

It was easy to bet against him, but from the opening tee shot you could tell Gary Woodland was comfortable and belonged in this grandest of moments, at least on this Sunday. And by holding off the baddest man in the game on Sunday at Pebble Beach, he proved he’ll belong for many Sundays to come.

Woodland could not have asked for a better start on Sunday. After a par at the first, he knocked both of his approach shots in-tight on both the second and third holes resulting in back-to-back birdies and found himself two-under through four holes.

Meanwhile, in the group ahead of him, Koepka was off to a blistering start with birdies on four of his first five holes forcing Woodland to keep pace and keep his foot on the gas.

Woodland was able to keep things in check before making his first bogey of the day at the Par 4 ninth. At the turn, Woodland held a two-shot lead over both Rose and Koepka who each shot even and three-under, respectively, on their opening nine holes.

But still, even with a two-shot lead heading with nine to play, it felt like it was Woodland’s tournament to lose and somebody else’s to win. With just two shots between him and a red-hot Koepka, this thing felt far from over.

Things did get extremely interesting early on during the back-nine with Koepka getting to within one as he finished the 13th hole, but then the whole vibe and tournament flipped on its head at the 14th.

Koepka wasn’t able to birdie the Par 5 after a poor wedge for his third shot. Just behind him Woodland pounded driver off the tee finding the fairway, but was now left with a decision to make: go for the green with a very tough pin and disastrous bunker out front or lay up to a yardage he likes.

Woodland went the aggressive route pulling 3-wood and hitting an unbelievable shot just over the back of the green from 260 yards. Right then it was very clear he was there to make things happen.

Woodland was able to get up-and-down for birdie to reclaim a two-shot lead over Koepka. As for Rose, he bogeyed the previous two holes putting himself out of contention.

Down the stretch, it turned into a two-man battle and instead of the man that had won four of the last eight majors coming out on top, we were witness to Woodland claiming his first major championship and just his fourth win on the PGA Tour.

Woodland played his final four holes in one-under while Koepka simply couldn’t get things going down the stretch coming down that stretch at even par.

That’s not to say there wasn’t a little bit of drama on the final two holes.

Woodland’s teeshot at the Par 3 17th was his worst swing of the day and missed the hour glass shaped green on the wrong side. He had the option of putting it, but instead elected for a 64-degree wedge and chipped it off the green, which turned out to perhaps be the greatest decision he’s ever made on a golf course.

Gary Woodland nearly holed the chip from ON THE GREEN! #USOpen pic.twitter.com/IWGxmVouf4

When it was all said and done, the former Kansas Jayhawk won at 13-under while Koepka finished three shots back at 10-under for the tournament.

WHAT A WAY TO FINISH!

For the golf fans out there that only pay attention when the big names are in contention and winning, maybe Sunday at Pebble Beach wasn’t great. Sure, you had Koepka there down the stretch, but for those that watch and follow golf it almost had a refreshing feeling to see Woodland make that putt on 18 and later hoist the U.S. Open trophy.

That is nothing against Koepka, either, I would’ve been ecstatic to see him pull off the three-peat and it’s flat-out insane what he’s done over the past three U.S. Opens. For a guy like Woodland however, who isn’t known by the average golf fan, to win, it serves as that reminder that all it takes at the end of any tournament is to put together a magical four-day stretch and that’s exactly what he did.

That’s part of the charm of the game, it can be anyone’s week any given week.

Woodland entered the week with 40-1 odds to win, and we haven’t seen a player with odds that long hoist a trophy at a major championship since Patrick Reed won the Masters in 2018 with 50-1 odds.

With the win, Woodland moves all the way from 25th to 11th in the Official World Golf Rankings.