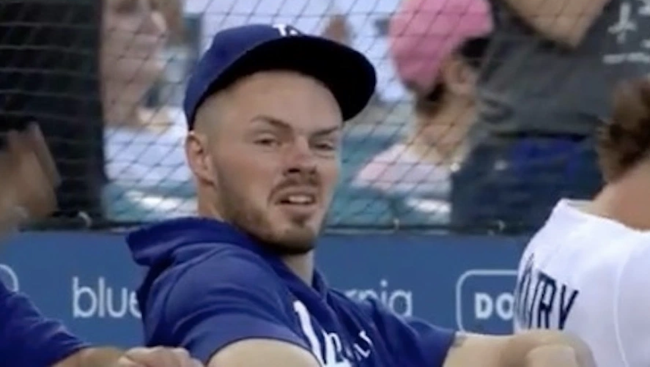 The the 23-year-old Dodgers middle infielder, who is currently on the disabled list with a strained hamstring suffered on Sunday, was still in the dugout during his team’s 7-2 loss to the San Francisco Giants when Muncy smacked a bomb in the first inning of Giants starter Kevin Gausman.

Not since Winona Ryder listening David Harbour’s speech at the 2017 SAG Awards have we witnessed a person going through such an unusual display of emotions.

@OrelHershiser: A few more facial expressions from Gavin Lux and he’ll be a cartoon. @Joe_Davis: Yea. I’m sure he’s already a gif.

Yes Joe, you are correct. pic.twitter.com/54WcQIj5gz

Naturally, because internet, Gavin Lux and his many faces of confusion slash happiness were immediately turned into a plethora of jokes, GIFs and memes on social media.

When you’re trying to work that @TheRock eyebrow raise but haven’t quite nailed it yet... pic.twitter.com/Psb6rQjymC

Me when they say “we don’t have bottomless mimosas” 😂😂 https://t.co/UWSsBc6qL1

When I’m out on Saturday night and someone proposes a 8:00am tee time https://t.co/FykwUIUNHX

I know we didn't win last night but I feel like we win every day with @TheRealGavinLux 's facial expressions 😂😂 https://t.co/E9iiGDoTfV

Hard to argue with that logic. Especially since this is far from the first time we have been able to enjoy them.

According to Dodgers manager Dave Roberts, Lux’s hamstring injury, suffered running out of the batter’s box on a ground ball in the ninth inning of Sunday’s loss to the Colorado Rockies, “could take some time” to heal.

Hopefully his rehab won’t take him away from the team, and more importantly the Los Angeles Dodgers dugout during his absence from the playing field.

Outfielder Zach Reks, a man with perhaps the coolest name in baseball, was recalled from Triple-A Oklahoma City to take Lux’s place on the active roster.

Lux had been filling in at shortstop for Corey Seager who has also been on the disabled list since May 15 with a broken bone in his hand. It is hoped that he will return to the Dodgers’ lineup sometime in the next week or so.