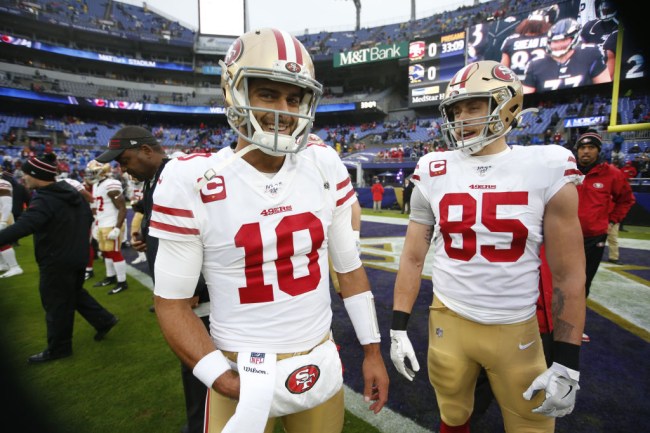 Jimmy Garoppolo seems like the kind of guy that can do no wrong, but like the rest of us humans, he’s really awful at one thing, apparently.

And, believe it or not, it’s a pretty big-time flaw when it comes to living in the year 2020. Apparently, he’s the worst texter ever, as in, he simply doesn’t text his teammates back. 49ers tight end Georg Kittle explained that the man simply doesn’t reply back, even if it’s actual questions about routes and in-game things.

“He is the worst texter of all time,” Kittle told the media in Miami. “I’m telling you, he leaves me on ‘Read’ all the time. I’ll be like ‘Hey Jimmy, I’ve got a question. Maybe on this play, should I run my route like this?’ No Response. ‘Jimmy, want to go to a movie?’ No response. And then next day he’s like ‘Yeah, I got your text. I just didn’t respond.’ Thanks, Jim. That’s awesome. So yeah, he’s a bad texter. Bad communication.”

Not only does Garoppolo not text people back, he keeps his read receipts on, which is an absolutely savage move. Honestly, though, who actually has their read receipts on these days? I mean, I remember when that feature came out on whatever the iPhone it was that debuted the feature, but it simply adds too much pressure to any text conversation on both ends.

Jimmy G is clearly busy doing more important things in his downtime and doesn’t have the time to respond to ‘hey, wanna hang out’ texts from his tight end.