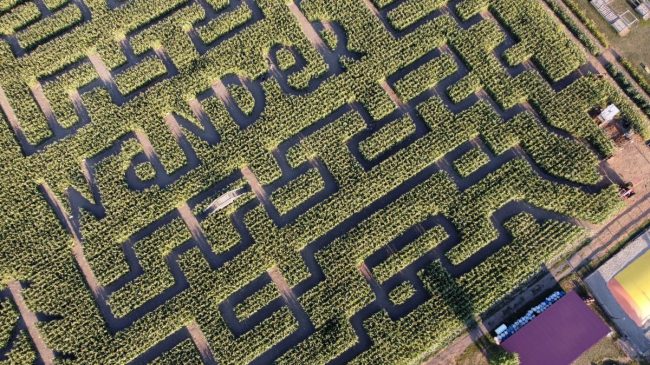 University of Georgia Quarterback Stetson Bennett has a truly remarkable story. A Georgia native and Bulldogs fan growing up, Bennett walked on to the team as a three-star recruit in 2017.

After just one season, Bennett transferred to nearby Jones County Community College. Bennett’s JuCo performance earned him a scholarship from the Louisiana Ragin’ Cajuns. But after Justin Fields’ shock transfer to Ohio State, Georgia coach Kirby Smart offered Bennett a scholarship and he returned to the Bulldogs.

Fast forward to 2021 and Bennett became Georgia’s full-time starter after an injury to USC transfer JT Daniels. Bennett ran with the opportunity. He threw for 2,862 yards, 29 touchdowns and just seven interceptions to lead UGA to its first national championship since 1980.

Bennett has ensured his spot in Georgia Bulldogs history, but fans are going to even further lengths to enshrine him.

Poppell Farms is located in Odum, Georgia four hours south of the UGA campus. The farm sells a number of different fresh products, but it’s perhaps most known for its corn maze.

That maze got a unique twist after the Bulldogs’ 33-18 victory over Alabama in the 2022 National Championship Game.

A farm in Georgia designed a 10-acre maze in honor of Stetson Bennett after the Bulldogs won the National championship last season 👀🔥 pic.twitter.com/xGRb2Pla4W

Yup, that’s Georgia QB Stetson Bennett in all his corn glory with his nickname “The Mailman” (he always delivers) and the final score of the title game below.

Bennett is back for a final go-around in 2022. He’s already helped UGA climb from No. 3 to No. 1 in the AP Poll. In two games, Bennett has 668 yards and two touchdowns.

His Heisman odds have skyrocketed as well. DraftKings Sportsbook lists Bennett as the fourth favorite to win the Heisman Trophy at +1400.

Armed with the best tight end room in the country and his favorite target, Ladd McConkey, we wouldn’t bet against him.