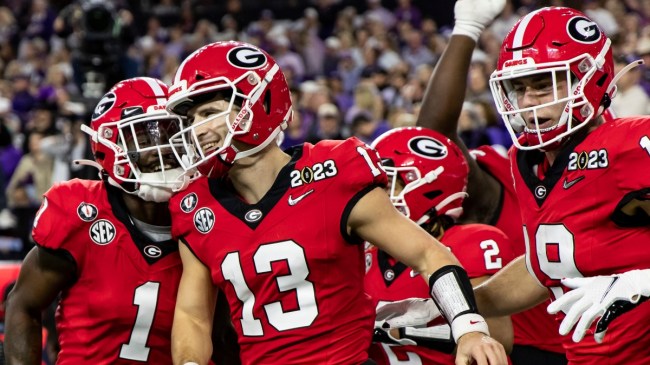 The Georgia Bulldogs beat down the TCU Horned Frogs 65-7. It was a brutal butt-kicking pretty much from the opening kickoff.

TCU never had a chance as the Bulldogs proved to be the most dominant force in college football. They were winning by so much that the players were having snacks on the sideline.

Unnecessary Roughness shows a quick Tik-Tok video of some Georgia players taking a plate of food from a fan in the stands. Looks like they opted for some chicken nuggets and shared a mini feast in the middle of the game.

There wasn’t any dipping sauce but a snack is a snack. If anything, the Bulldogs are just proving how much better at football they are than everyone else in the nation. There is no other program in college football that can just nonchalantly have a snack mid-game in the National Championship. Georgia is just on a completely different level and it might take a while for someone to dethrone them.

I mean, this team was basically celebrating on the sidelines by halftime. After the game, the players were in full celebration mode, as they were seen sipping champagne with the fans, per David Ubben.

Georgia fans in the field suites are offering players champagne. Kirby Smart said no but a few players partook. pic.twitter.com/JcoXXJJo4R

Might as well have something to wash down that mid-game snack, right? Look for Georgia to remain on top of the college football world, as it’s hard to imagine this team going anywhere anytime soon.