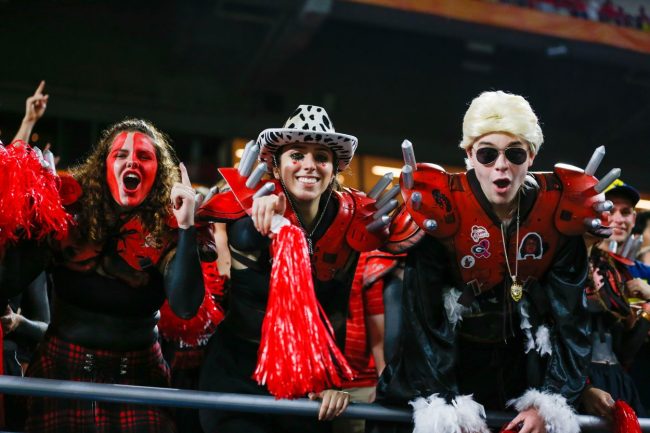 Georgia football fans are self-proclaimed drunk and obnoxious. For some reason, they a proud to be attached to those titles.

As such, they lead one another in a call-and-response chant that sounds as follows:

Who’s that coming down the track?

Mean machine in red and black!

Ain’t nothin’ finer in the land!

Than a drunk, obnoxious Georgia fan!

The Bulldogs faithful are incredibly incorrect. In fact, there are few things that aren’t finer in the land than a drunk, obnoxious Georgia fan.

Take this weekend, for example.

Ahead of Monday’s College Football Playoff National Championship, fans from both fanbases took over Indianapolis. However, the Bulldogs fans are reportedly out-numbering the Crimson Tide about 3-2. It’s a 60/40 split in favor of the Georgia faithful.

Now that they are there, they are playing directly into their own claims of being drunk and obnoxious.

Former Alabama cornerback Marlon Humphrey shared his experience on the plane to Naptown and looked miserable. Meanwhile, the cops were called to one of the finest, most historic restaurants in Indianapolis because the Bulldogs fans eating dinner would not shut up.

It is hard to expect anything more from grown men and women who literally bark like dogs, but that is a low, even for them. But those who had the police come and interrupt were not the only ones in Indy making a raucous.

At another restaurant across town, it was a similar scene. Look at this restaurant full of people trying to just enjoy their dinner while a self-proclaimed drunk, obnoxious Georgia fan screams at the top of his lungs and barks like a dog.

Take note of the color of the man’s face. Particularly at the nine-second mark. It is beat red.

He is really getting into it and as was this guy on Monday afternoon. Listen to those voice cracks and, again, take notice of his reddened face while trying to keep a vein from popping out of his head.

If you were considering rooting for the Bulldogs before, perhaps you should consider the drunk, obnoxious Georgia fans.