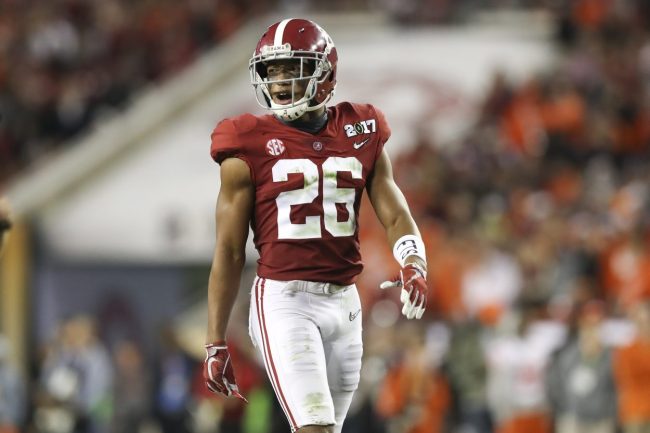 Although the College Football Playoff National Championship being played on a Monday night continues to make no sense (outside of a money grab by ESPN), it allowed for both Georgia and Alabama fans to take over Indianapolis all weekend. It also allowed someone who would not have been able to make the game on Saturday or Sunday to be there today.

Former Crimson Tide defensive back Marlon Humphrey has arrived in Naptown. The 25-year-old is an Alabama-native and spent three years in Tuscaloosa. After redshirting in his first year on campus, Humphrey started two years on Nick Saban’s defense before declaring for the NFL and being drafted by the Ravens in the first round.

On Sunday, his fifth season in the league came to a close. Baltimore lost to Pittsburgh and was officially eliminated from playoff contention around 5:00pm ET.

As a result, Humphrey is able to support his former school in the National Championship. He hopped on a plane after the game and headed to Indianapolis.

However, he could not have looked more miserable while en route. Humphrey posted a video from the flight and was clearly annoyed with the Georgia fans around him.

In the video, the Bulldogs fans can be heard “Calling the Dawgs.” The chant, which is accompanied by a lot of grown men and women barking like dogs, self-proclaims the fanbase as both drunk and obnoxious.

Here was the scene on Humphrey’s flight:

I apparently hopped on the wrong plane heading to Indianapolis pic.twitter.com/0UschpFbl7

Again, these are grown men and women who are barking like dogs. GROWN MEN AND WOMEN… BARKING LIKE DOGS.

That is strange in itself. And then, they go on to proclaim that there is nothing better than “drunk, obnoxious Georgia fans.”

In reality, most things in life are better than drunk, obnoxious Georgia fans. Imagine being proud of those characteristics?!