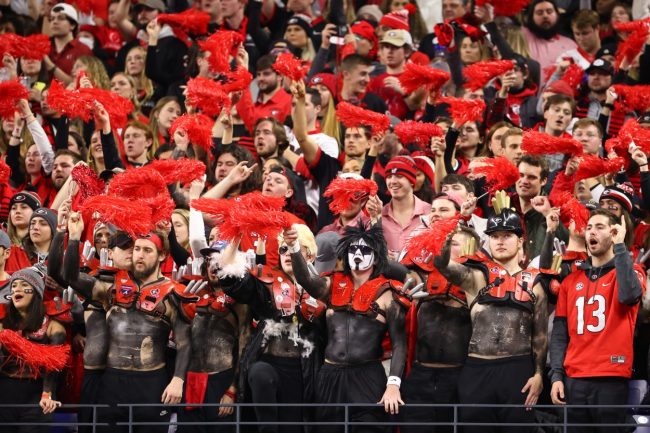 Georgia football won its first National Championship since 1980 on Monday night. Not only did it mean a lot to the players on the field, but it meant a lot to the fans both in Indianapolis and at home in Athens.

For one fan, who is also a reported former player, it meant just a little bit more. After the clock hit zero, as the Bulldogs’ sideline exploded onto the field and coaches in the booth ran down to join the celebration, as did the fan.

After clearing the barrier from the stands, the fan evaded the first line of security and took off toward the podium. Based on the photos, he made it to about the 50-yard-line before a security guard got him by the jersey and made a celebration-saving stop.

The fan had a big smile on his face after being escorted off of the field.

He was actually pretty nimble for as drunk as he was. Avoided the first line of defenders and made it to the confetti. pic.twitter.com/1WSijjrp1W

As he was walked into the tunnel, the fan was met with a rousing ovation from the Georgia faithful.

This Georgia fan got a huge round of applause after getting arrested for rushing the field pic.twitter.com/yw1ymLYP4G

Georgia won its first national title in four decades and this fan was not going to let the constrains of society keep him from celebrating with his team. Literally, his team.

According to a report, that fan was more than just a fan. He has been identified as former Georgia walk-on quarterback Ben Wilson.

Wilson was not arrested, but spent time in a holding cell. He also will not be allowed in Lucas Oil Stadium for the rest of the day.

The UGA fan who rushed the field is Ben Wilson…. A former walk-on QB at UGA. Per sources, he was not arrested last night, but instead spent 20 minutes in what he described as “Colts jail” [a holding cell inside the building] and received a 24 hour band from Lucas Oil Stadium. https://t.co/sGOC2sSOeQ

Wilson posted a video of his effort on Instagram with a legendary quote.

Wilson is now a country music artist living in Nashville. Does it get any more Georgia? You can find his Spotify profile HERE.

He was not the only one to rush the field.

Nothing like spending a night in the tank after your team wins the National Championship pic.twitter.com/J7CnsmRDxG

This dude just jumped onto the field, got instantly arrested and has a huge smile on his face. Georgia fan I guess? pic.twitter.com/en32ZtBHce

Their fate, however is unclear. Wilson, on the other hand, made it out unscathed.

While the Georgia fans were trying to party on the field in Indianapolis, their fellow Dawgs were flooding the streets in Athens. It was a well-deserved celebration for a championship that was a longtime in the making.