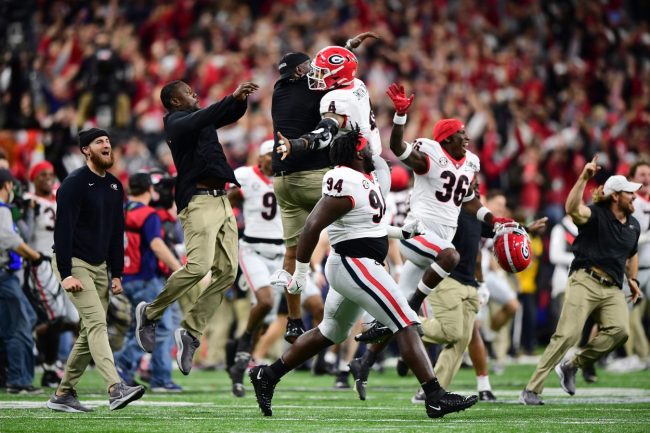 Monday’s National Championship win marked the first time since 1980 that Georgia finished the season atop college football. It was also just the second time that a former Nick Saban assistant coach beat his former mentor, as Kirby Smart hoisted the trophy.

Needless to say, especially after losing to Alabama in the SEC Championship, the victory meant a lot to the Bulldogs.

The game ended on a sack of Heisman Trophy winner Bryce Young and as the clock hit zero, the Georgia sideline erupted. Players, coaches, alumni, and even Migos rapper Quavo stormed the field to celebrate in the middle of Lucas Oil Stadium.

It was absolute scenes.

However, while those on the field started to party, a group of UGA coaches were not able to join the party right away. The staff members who were in the coaching booth high above the field, had to get down to their team.

The video that resulted from the mass exit from the coaches’ box was absolutely amazing. Dressed in their gameday attire, some wearing backpacks, the staffers rushed to the elevator and enthusiastically made their way down the elevator and onto the turf.

Watch UGA’s coaches run screaming out of the booth after winning the #NationalChampionship pic.twitter.com/KvuFlJ82u4

The coaches who were wearing backpacks looked like giddy little kids who were running to catch the bus on the last day of school.

You will never have an elevator ride as happy as the Georgia coaches just did. pic.twitter.com/GnN5O3JzLy

Joy is contagious, and whether you were rooting for the Dawgs or not, it’s impossible not to crack a smile. Full grown men hauling ass through the box to pack an elevator after winning a national championship is a truly jolly sight.