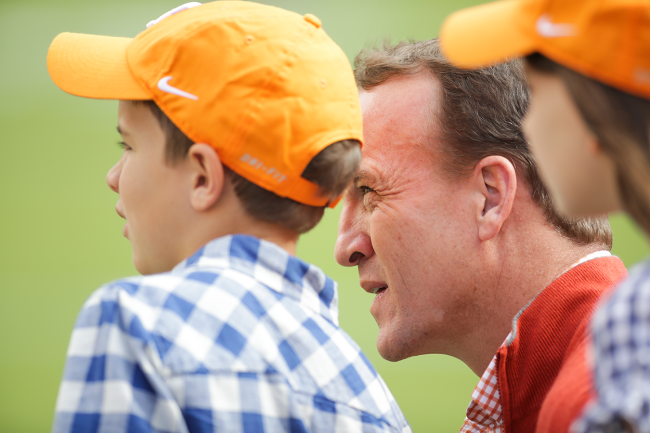 Peyton Manning’s son Marshall is only 10 years old, but he is already set up to attend any college in the country that he wants. The son of one of the greatest quarterbacks in NFL history is bound to be a highly-coveted prospect, should he choose to play football.

However, his father apparently has one school in mind already.

Manning, who played at Tennessee, was in attendance at Saturday’s game between his alma mater and No. 1 Georgia. Prior to kickoff, the 45-year-old was on the field and got the opportunity to talk to Bulldogs head coach Kirby Smart.

After the game, in which Georgia won by 24, Smart revealed what he and Manning discussed. In addition to some small talk about the game ahead, Manning turned the focus of the conversation to his son.

Per Smart, Manning asked him to give Marshall an opportunity when he is old enough to get recruited.

“I got a chance to talk to Peyton before the game but it was more about his son,” Smart said in his postgame comments. “He wants me to recruit his son. He had me worried because he said he was gonna play quarterback today. So, I was getting even more nervous.”

Here is what he had to say in full:

This news is very interesting for two reasons:

Marshall Manning still has about eight years until he has to decide on where to play college ball. Is he off to Georgia?