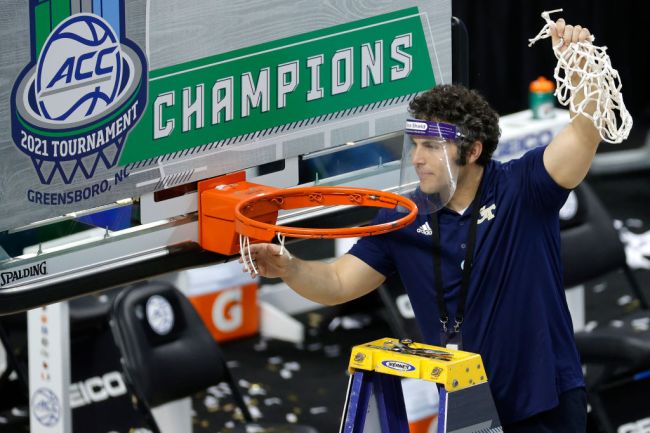 Georgia Tech is headed to the NCAA Tournament as Atlantic Coast Conference champions.

The Yellow Jackets would have gone dancing without a win and their conference tournament victory solidifies how dangerous they can be in the field of 64. ESPN’s Joe Lunardi has Josh Pastner’s team projected as a 9-seed at 17-8, but this is less about their on-court performance and more about why you should be rooting for one of the funniest coaches in the country and a team that plays with a lot of emotion.

For those of you who aren’t familiar with the team’s fifth-year head coach, Pastner is a character. The 43-year-old has been in Atlanta since 2016 and has his best team on the court this year. Having played at Arizona from 1996-2000, he worked his way up as an assistant for his alma mater and Memphis, before taking over as the head coach of the Tigers from 2009-16 before taking over at Tech. His high-energy, overly-positive demeanor is unintentionally hysterical and his postgame interview last night was the perfect example— all the way down to the face shield look and getting super thick out of nowhere.

While the clip almost seems scripted or performed, that’s just how Pastner is. He is unapologetically authentic and loves life. Take his voicemail message, for example. ESPN shared what it sounds like when you call his office and the 45-second answering machine goes off on a tangent about the importance of living life with no regrets. Just when you think you’re being punk’d, he chimes in with his request for you to leave your name and number so he can call you back.

How annoyed would you be if you called someone and this was their voicemail? pic.twitter.com/AIomFAuNSW

To get his team fired up before the tournament, Pastner put his curly, hard-to-tame hair on the line. He told his players that they could do “whatever they want to do” to his mop if they won the ACC championship. After winning the title, Pastner called himself “a man of his word,” and acknowledged that his guys are free to style his hair however they please— including a possible braiding.

“If that’s what they want to do, that’s what I’ll do,” Pastner said. “I’m going to try to convince them and say, ‘Hey, guys, let’s get through the tournament.’ I’d rather keep my hair as it is. Maybe I’ll say it’s a good-luck charm. We’ve won eight in a row, I haven’t got a haircut.”

This isn’t the first time that the West Virginia native used unorthodox tactics to get his locker room pumped. Early on in the season, he brought a Coronavirus piñata and a ton of candy to celebrate a win. Yes, they really smashed a COVID-19 piñata.

Even if we have to bring the gas station to us @AndyDemetra 2020 right?? pic.twitter.com/ngsCvnqsYc

The stories are endless and back in 2017, Pastner received a voicemail about his fans and an “air-ball” chant against Syracuse. The Orange fan took the time to wait out Pastner’s lengthy answering machine and left an angry message. There are very few people who would call back, but Pastner had the time.

“I said, sir, a few things with all due respect,” Pastner said. “This is not intramurals nor is it the ‘Love Boat’ where everyone gets served cocktails at 4 p.m. I said this is men’s elite college basketball and I said the air-ball chant has gone around since Dr. James Naismith invented the game. I said, I guarantee you if one of our guys air-balled the ball at the Carrier Dome in Syracuse, thirty-thousand people would be chanting airball for the entire game.”

Just think about that for a second. Pastner, a head coach at a Division I program, sat down to a negative voicemail one afternoon and not only decided to call the disgruntled fan back, but to put him in his place. And you know that he did so with such an upbeat, positive tone that it only pissed off the Syracuse fan even more. The bottom line is that Pastner is a joy to watch function in everyday life and on the court.

If a head coach who is excited at all times isn’t enough to get you on the Yellow Jackets bandwagon, the team’s leading distributor and second-leading scorer is a three-star recruit out of Brooklyn that wasn’t considered an ACC-caliber player by anyone but Pastner. Jose Alvarado has had to balance school, basketball and raising a six-month old daughter throughout the season and was overcome with emotions and humility after Saturday’s win.

How can you not love Jose Alvarado pic.twitter.com/kAJIqqmZ7A

Alongside Alvarado in the backcourt is the ACC Player of the Year, Moses Wright. He was a ZERO-star recruit in high school and had only one other offer from a Division II school. Pastner gave him a chance.

Pastner’s Georgia Tech team has an abundance of players that you want to root for and it all starts with their head man. He loves his guys and his guys love him. As March Madness tips off next week, getting behind the Yellow Jackets should be atop your list.