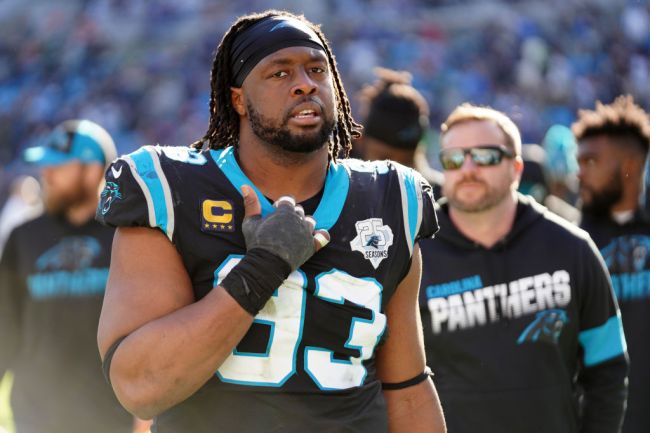 Since the end of the NFL Draft, football fans have been exposed to the high prices players are willing to pay in order to wear the jersey numbers they want with new teams. Last month, New York Giants rookie Kayvon Thibodeaux made a $50K donation to Service Dog Charity to secure the number 5 on his new team.

This week, it was revealed that Sauce Gardner had matched that number and paid $50K to D.J. Reed to wear number 1 for the New York Jets. While these numbers sounded like a lot to pay to get to wear a particular number, it turns out they were nothing compared to what Gerald McCoy paid for number 93 when he joined the Carolina Panthers.

Yesterday on NFL Total Access, McCoy revealed that he paid $250K to wear the numbers 93 for his lone year with the Panthers after wearing that jersey number at Oklahoma and with the Tampa Bay Buccaneers.

It sounds like Kyle Love was a much better negotiator than Reed or Graham Gano when it was time to bargain his jersey number away. $250K to let somebody else wear your jersey number for their only season with the Panthers is just great business.

Luckily for McCoy, he probably wasn’t too worried about that small expenditure during his time with the Panthers after making over $150 million over the course of his NFL career.