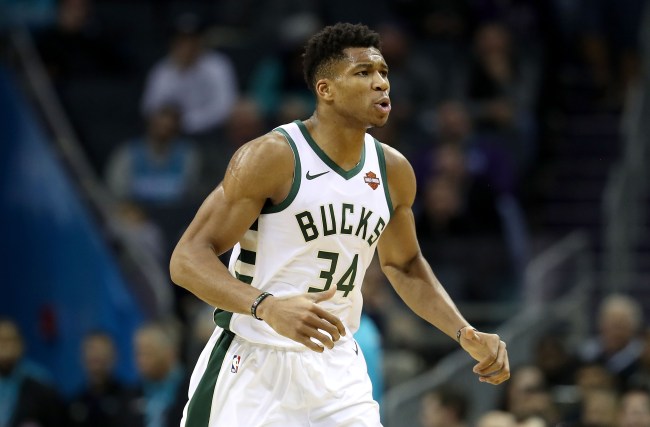 Giannis Antetokounmpo has become one of the NBA’s biggest superstars in the past couple of years, and has his Milwaukee Bucks primed to make a giant leap in an Eastern Conference that appears to be wide open. The guy himself, nicknamed the “Greek Freak,” has gone from mercurial talent to one of the league’s best all-around players — and he doesn’t sound like he’s ready to give away any of his secrets to opponents anytime soon.

In an article with The Athletic the other day, the 24-year-old Antetokounmpo said that he’s not a big fan of other NBA stars like LeBron James, Kevin Durant, Chris Paul and others being all “buddy-buddy,” admitting that he could never befriend someone who wasn’t on his team and then go play against them. It’s an old school mentality that makes me like the dude even more.

Here’s what Giannis Antetokounmpo had to say in The Athletic piece, via Bleacher Report:

“I can’t work out with you in the summer and then play you in a few months,” Antetokounmpo said. “It feels weird. It doesn’t feel right with me. Like other players, it’s cool for other players, but I don’t. I don’t want to. Other guys do it.”

“I hate it when…” Antetokounmpo said while doing a mock pose for a picture. “I hate that. I don’t want [opponents] to see me to be buddy-buddy with me.”

“I feel like with LeBron and KD [Kevin Durant], KD did that to LeBron,” Antetokounmpo told The Athletic about their prior workouts together. “Take a lot of his thoughts and use it against him. And that’s what I don’t want guys doing to me.”

This is awesome stuff from Giannis Antetokounmpo, because, well, he’s right. When the hell did it become common practice for some of the league’s best players to secretly recruit one another to create superteams, or show some bro hugs after big losses? To this day, I still hate the images of LeBron James giving love to some Golden State Warriors players after losing in the NBA Finals. Would Michael Jordan had ever done that? Hell. F’in. No!

In a recent example of Antetokounmpo truly practicing what he preaches when it comes to not befriending other NBA players, his reply the other day after getting dunked on by New York Knicks player Mario Hezonja pretty much sums it up. Giannis said he was, “going to punch him in the (groin)” the next time he sees Hezonja, showing that there’s truly no love lost.

Giannis Antetokonmpo on Mario Hezonja stepping over him:

“Oh yeah, I’m gonna punch him in the stand next time.” pic.twitter.com/nEAHjYeJ4y

With Giannis averaging 26.8 points, 13.0 rebounds, 6.0 assists, 1.5 steals and 1.3 blocks, it’s a refreshing take from a legit MVP candidate. Plus, with numbers like those, who the hell would be dumb enough to give any secret recipe to other guys who has to try and slow it down? This is competition, we’re not supposed to play nice.

Considering my Cleveland Cavaliers suck now, I’m full aboard the Milwaukee Bucks and Giannis Antetokounmpo train, because his killer mentality is how more athletes, especially superstars, should think.