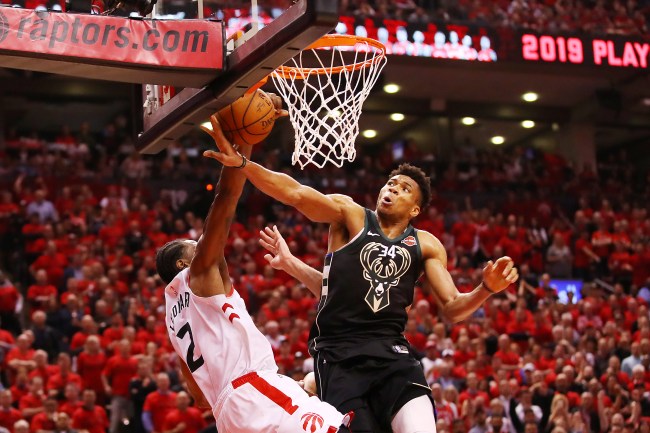 Giannis Antetokounmpo was last seen walking out of his postgame press conference following his team’s Game 6 loss in the Eastern Conference Finals to the Toronto Raptors the other night, leaving many wondering what might have happened. We’ve seen some athletes do similar things before after a tough defeat, but, according to ESPN’s Stephen A. Smith, The Greek Freak was reportedly upset about a report by his colleague, Malika Andrews, suggesting Giannis Antetokounmpo could leave the Milwaukee Bucks in the coming years if the team doesn’t reach the NBA Finals.

Here’s the video of Antetokounmpo leaving the podium after the loss on Saturday night.

Giannis walked out of his presser pic.twitter.com/AI2IG5Gv9Y

When fans first saw the video of Giannis Antetokounmpo leaving, they probably thought it was just frustration about the biggest loss of his career. But, on First Take this morning, Stephen A. reports it was more than just that.

“So inside of a 15- to 20-minute period after losing the game, he was made aware of an article that [Andrews] had written where basically she did her homework, spoke to a multitude of people and was thoroughly informed that, again, a lot of his, you know, decision-making as it pertains to his willingness to stay in Milwaukee are tied to reaching the NBA Finals. If Milwaukee’s progress towards the Finals is impeded in any way, this season, next season, etc. at some point in time, he’s going to want his way out. In a period of 20 minutes, in the immediate aftermath of suffering the most devastating loss of his professional career, he got wind of that story, and he was not happy about it.”

Whether Malika Andrews’ story is true or not, the Milwaukee Bucks are on the clock when it comes to having, arguably, the best player in the world, putting them under all sorts of pressure to win a title now before possibly watching Giannis Antetokounmpo walk in free-agency. While the team can offer Antetokounmpo a five-year supermax contract that would pay him $247.3 million over five seasons next summer, with three key players free agents this summer, the window to try and win a title in Milwaukee might already by slowly closing.

There have already been rumors that the Los Angeles Lakers hired Jason Kidd as an assistant to try and appeal to Giannis when he’s a free agent, so Andrews’ report just seems to be the latest in NBA superstar drama, where people believe every great player wants to be on a superteam. Time will tell if Giannis Antetokounmpo does, in fact, want to stay in Milwaukee or not, but, right now, he’s giving every indication that he’s only focused on leading the franchise to a title and not playing elsewhere.