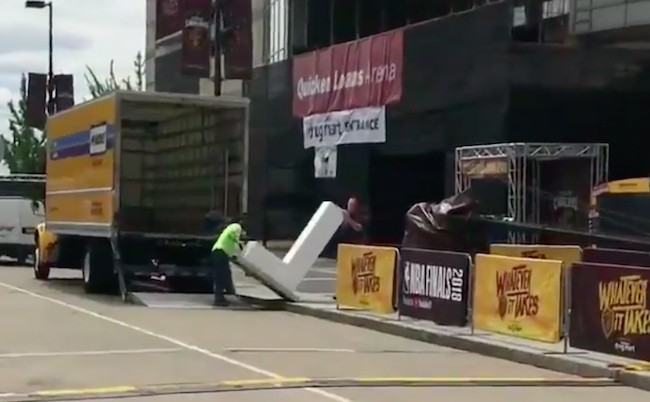 A lot of people have taken an L in the past couple of weeks, whether we’re talking about Drake’s de facto loss to Pusha T in an incredibly one-sided beef or the hundreds of thousands of people who have traveled between Brooklyn to Manhattan on the subway. However, no one has taken as many L’s as the Cleveland Cavaliers have in the NBA Finals, where they currently trail 3-0 to the Golden State Warriors.

Despite an absolutely abysmal performance by Steph Curry last night, the Warriors were able to jump on the back of Kevin Durant on their way to a 110-102 victory that proves Vegas was pretty spot on when they gave the Cavs close to no chance to win the series. Golden State might be the team who plays at Oracle, but Quicken Loans Arena was the sight of pregame omen that perfectly predicted the outcome of last night’s game.

Total Pro Sports shared a video captured by NBC Sports of two men transporting a giant “L” from a moving truck and into the arena in a clip that’s just asking to get GIFed and turned into a meme.

This isn’t the first time a physical object in Cleveland has been a bit too on the nose. Last season, a dumpster fire started outside of the field the Cleveland Browns call home, which summed up the state of the franchise better than words ever can. I’m not sure why this L was brought into the arena in the first place, but the Cleveland might want to take it outside and burn it as a sacrifice if they want to avoid a sweep.