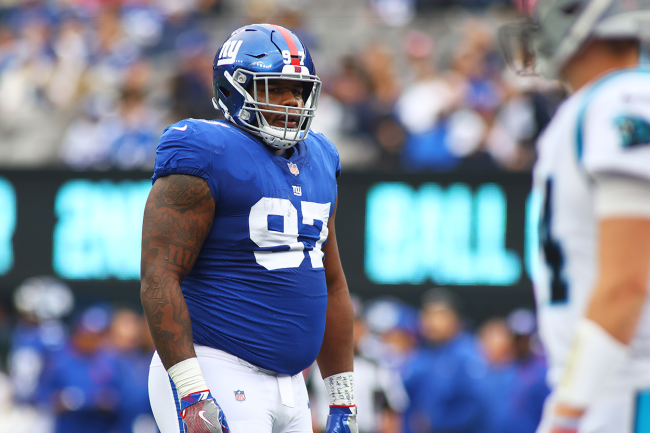 New York Giants defensive tackle Dexter Lawrence is one of the largest human beings on the planet. The North Carolina-native recently reported to the team facility and he looks even bigger than ever before.

Lawrence, who was the No. 2 overall recruit in the college football recruiting Class of 2016, was a two-time first team All-ACC player at Clemson and a two-time national champion. After an impressive college career, he was drafted No. 17 overall in 2019 and has been a big part of the Giants’ defense.

In a new behind-the-scenes look at the last few weeks New York’s team facility, Lawrence arrives for the offseason workout program and talks about getting big. He is already massive and the fact that he is getting in the weight room to get even stronger is a scary thought, especially considering that he ran a 5.05-second 40-yard dash.

Dexter Lawrence not only towers over many of his Giants teammates, but he might be twice the width of them as well.

Dexter Lawrence might be one of the biggest human beings on planet earth… pic.twitter.com/vNDmovREPJ

Over the course of his first few years in the league, Lawrence has recorded 145 total tackles, nine sacks, five pass deflections and two forced fumbles. He is hoping that 2022 will be his big breakout season (pun intended) after three years of consistent play.

dexter lawrence is a monster pic.twitter.com/lc6jBSjTq1

If Lawrence can trim down some of his offseason weight and convert it to muscle, it’s hard to imagine anyone in the NFL laying a successful block. What a monster.