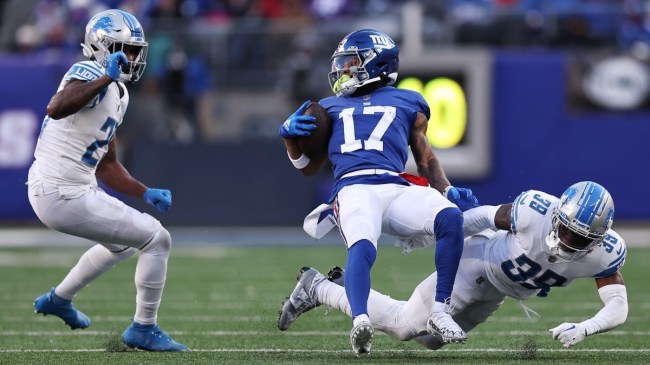 The announcement comes after a slew of major injuries on the stadium’s artificial playing surface, with the most notable coming to Giants wide receiver Sterling Shepard. But Shepard’s injury is just one of a long line of major injuries on field turf, including those to opposing players. The list includes some of the league’s biggest names such as Saquon Barkley, Joey Bosa and Odell Beckham Jr.

Players rejoiced over the news of the switch. But unfortunately, the change is coming a bit too late for New York Giants wideout Wan’Dale Robinson. The Giants selected Robinson in the second round of the 2022 NFL Draft with the 43rd overall pick. Fans roundly booed the puzzling pick, which was seen as a reach at the time. But Robinson has impressed in recent weeks.

He took on a larger role after New York traded 2021 first-round pick, Kadarius Toney, to the Kansas City Chiefs. Since that point, Robinson has shined. The rookie had his best game of the year in Week 11 against the New York Giants. Robinson hauled in nine passes for 100 yards, both career highs.

But then disaster struck.

Late in the game, Robinson appeared to tweak his left knee while planting to make a cut and getting shoved out of bounds.

Wan'Dale Robinson has been ruled out for the remainder of the game after reportedly injuring his knee on this playpic.twitter.com/RNQiJisL2e

He had to be helped off the field and did not return. On Monday, New York coach Brian Daboll confirmed the worst. Robinson suffered a torn ACL and will miss the remainder of the 2022 season.

WR Wan’Dale Robinson (knee) has a torn ACL, per Brian Daboll. His season is over. #giants

Giants fans were absolutely fuming over the injury and the fact that the team’s home field claimed yet another victim.

we are cursed and also FUCK metlife stadium turf https://t.co/KZqbBAzBBo

Not only are the Giants now down another playmaker, but the turn could affect their ability to attract Odell Beckham Jr. back to New York. The star wideout is recovering from his own torn ACL and is reportedly interested in joining the Giants or Dallas Cowboys when he returns.