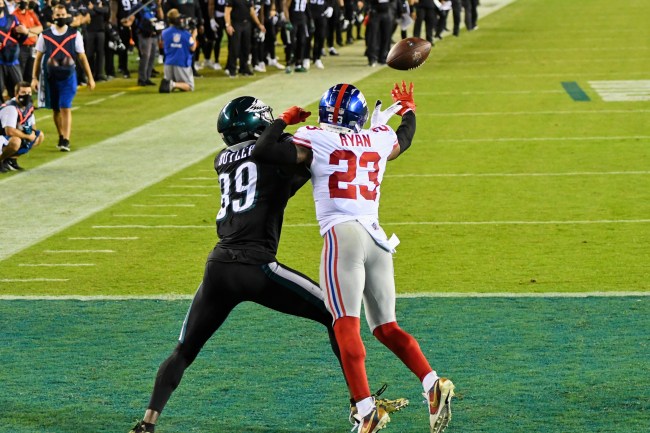 The New York Giants nearly pushed Tom Brady and the Tampa Bay Buccaneers to overtime on Monday Night Football but failed to complete the 2-point conversion and the Giants lost to the Bucs 23-25 and moved to 1-7 on the season but still only 2 wins off the NFC East division lead.

When the game was over, Giants Safety Logan Ryan and his college sweetheart (now wife) Ashley Ryan took the scheduled day off to fly to their offseason home in Florida and vote but Ashley was in extreme pain. Logan consulted with one of the team’s trainers which led to him immediately taking her to the emergency room and seeking medical attention that quite possibly saved her life.

pregnancy, according to her husband. The condition is caused by a fertilized egg growing outside of a woman’s uterus and can lead to life-threatening bleeding.

“The egg was about to burst, so she ended up going to emergency surgery and they ended up saving her and preventing a lot of what could’ve been done,” Ryan said. “A trainer on our team, Justin Maher, telling my wife to go to the ER at 1 a.m. could’ve saved her life — or saved a lot of internal bleeding there. That’s the type of organization we have here.”

“There are really good trainers here. There are really good people behind the scenes working hard for us to get wins, and I’ll do everything I can to play for a coach like that and play for an organization like this, because if that wasn’t the case I don’t know if my wife would be here today. And, honestly I’m extremely grateful for this organization and for Joe and for everyone to understand things bigger than football, especially this year.” (via NYPost)

As a fellow husband and father, I cannot imagine how terrifying that must’ve been for their family and I’m sending some positive thoughts their way during recovery. He listened to the experts and it probably saved a life. There’s a lesson to be learned here for all the keyboard doctors of the world. Listen to the experts and listen to your body.

Logan has 47 tackles and 1 Sack so far this season. The Giants (1-7) face Washington (2-5) on Sunday in an NFC East divisional matchup that could see the 2-5 Redskins jump to the top of the division with a win. So there’s that.