Giants First Round Pick Kadarius Toney Shows His ‘Dog Mentality,’ Goes Through His First Day At Rookie Camp Wearing Only One Shoe 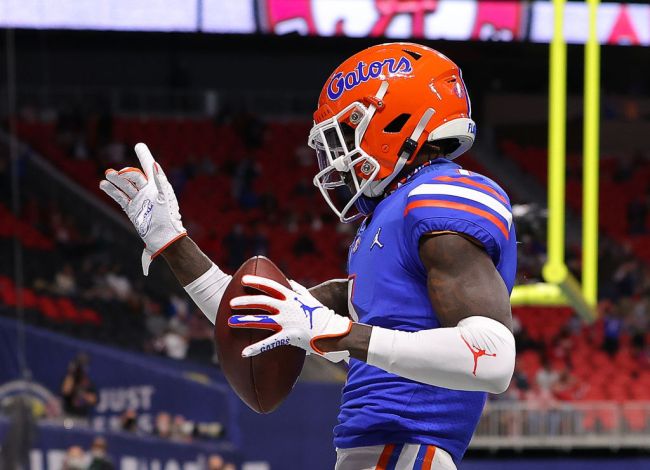 New York Giants first-round draft pick Kadarius Toney didn’t get to finish his first NFL practice. However, he was willing to do whatever he could to participate. Even if that meant going barefoot.

Toney, a wide receiver from Florida, did not participate in the conditioning runs at the end of Rookie Camp Day 1 because he tweaked his right foot. The decision to sit out was just a precaution, and he attributed the discomfort to his cleats being the wrong size. That wasn’t stopping him from trying!

The 22-year-old’s first action in a Giants uniform was a simple ladder drill. He ran through the agility portion, stutter-stepped and then caught a football that was flipped to him. It was a fairly standard drill and nothing in particular stood out. Except for Toney’s (lack of) footwear.

Kadarius Toney going through individual drills in one cleat… pic.twitter.com/FASsOmjKH5

He began the day wearing clue cleats and no socks, but the equipment staff had the wrong size. Instead of sitting out, Toney went through the morning without one of his shoes.

So, at #nyg rookie minicamp, WR Kadarius Toney is going thru drills … without a right shoe. Or cleat. 🏈🤷‍♀️ pic.twitter.com/yNPOVxvVQP

It was an on-going saga throughout the day and Toney went through quite a few pair. After ditching the blue cleats, he went to red ones with no socks. Then he added white socks to the red cleats. Eventually, he settled on white cleats with white socks. Toney was in and out of practice throughout the day as they tried to get him fitted right. He shut it down late in the afternoon with some discomfort.

Either way, it was a great first showing for the former Gator. He wanted to do whatever he could to be out there on the field with his team. Head coach Joe Judge was surely happy with the effort.

“I think it was just the wrong size,” Toney said to the New York Daily News. “They’re figuring that out right now. . . . do whatever it takes, you know what I’m saying? I probably have [done that before], honest. I don’t remember. It’s just me. That’s the dog mentality.”

That dog mentality will be important for the No. 20 overall pick. It wasn’t a surprise that he was drafted in the first round, but there were a few other wide receivers remaining on the board who many thought might go before him. Hopefully today he will be able to keep grinding, with both shoes on.