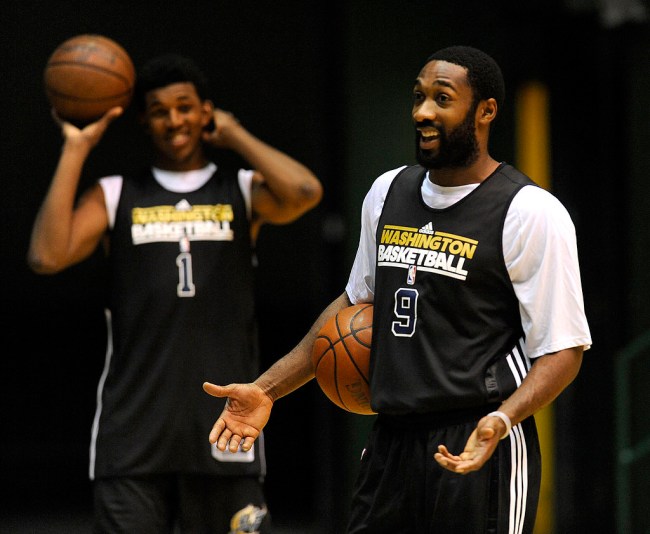 When you consider most guys in the NBA have an incredibly competitive nature in addition to millions of dollars at their disposal, it’s only natural that many of them decide to engage in some pretty high-stakes wagers, which is exactly what Javaris Crittenton and Gilbert Arenas did when they decided to play some cards while on the Wizards in 2009.

Crittenton would eventually find himself over $1,000 in the hole and in a heated exchange of words with his teammate, which (as Arenas recounted last year) would eventually result in both men bringing guns into the locker room before the former thrust one in the face of his fellow Wizard.

Both men were suspended for the incident and Arenas was eventually charged with a felony for being in possession of an unlicensed firearm and sentenced to 30 days in a halfway house (Crittenton was sentenced to probation and saw his NBA career come to an end, and in 2015, he was sent to prison for 23 years after pleading guilty to manslaughter in connection to a 2011 shooting).

However, it turns out that infamous showdown wasn’t the only gun-related incident Arenas found himself at the center of during his time in Washington, as he and Nick Young recently recounted the time he shot Swaggy P with a BB gun…during a meeting about gun safety.

Shoot a teammate with a BB 🔫 in the NBA gun awareness meeting?

Yup, Gilbert Arenas did that, but it was @NickSwagyPYoung’s fault 🤣

According to the duo, Young and some teammates snuck into Arenas’ house with paintball guns in tow to give him an unexpected wakeup and Young had the bright idea to bring a BB gun to practice the following day for reasons even he couldn’t explain.

On that same day, the NBA had organized a meeting to emphasize the importance of gun safety, and at one point, Arenas grabbed the gun from Young’s locker and fired a pellet at him.