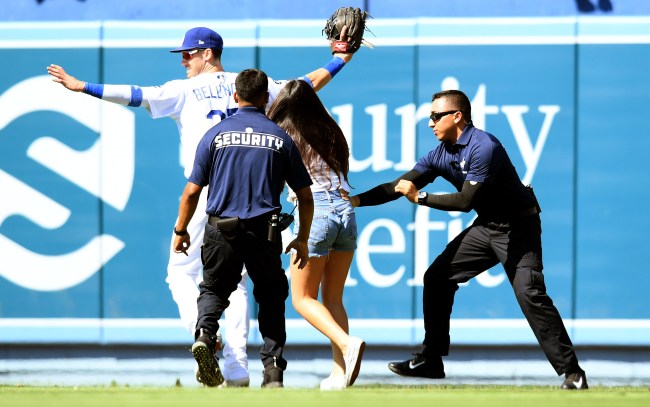 Listen, I get it. The politically correct think to say about people running onto the playing fields at sporting events is to tell people to stop doing that. It’s illegal, it interrupts the flow of play, and most importantly, it makes athletes nervous and fearful that someone is going to really get hurt.

It’s almost always so great when it happens.

How else would we know that the Atlanta Braves security force is the second coming of the 1985 Chicago Bears’ 46 defense?

There is, of course, a tipping point where it gets old, however. Take this week, for example.

Monday night, for the second time in two days, a fan ran onto the field to give Dodgers heartthrob Cody Bellinger a hug.

That might have been entertaining had the exact same thing not happened the previous day.

On Sunday, apparently setting a precedent, a different fan ran onto the field to give Bellinger a hug. She too ended up being tackled by security, but based on photos (and her posting about it afterward), she seemed pretty happy with her decision.

best day ever? i think so 💙 pic.twitter.com/FE9ifkOEif

Bellinger, for his part, was a good sport in both cases, but even he admits he’s getting a little concerned that this is becoming a trend.

All that being said, the story behind the first girl’s close encounter with Bellinger is pretty great, as she explained exactly what went down on The Ben Maller Show on Monday.

“I had been dying to meet him. I thought to myself I’m young now and this is probably going to be the only time I’ll ever be able to meet him,” she explained. “My mom was in the restroom when I did it. I gave him a hug and he said ‘You really did that?!’ and that’s when they tackled me. I didn’t even feel it, I was so excited. I’m not a bad kid or anything, it was a once in a lifetime type thing.”

Listen to the entire very entertaining interview below…