Arkansas Fan Runs Onto Field At The College World Series, Gets Obliterated By Security Guy 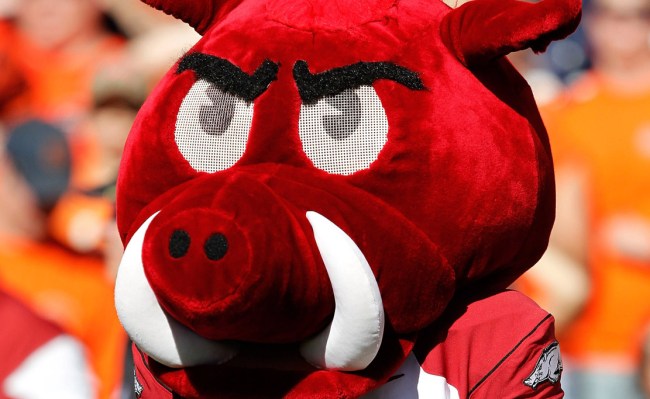 See if any of this sounds familiar to you. A fan of the University of Arkansas decided that during a weather delay at the College World Series to hop onto the field for his 15 seconds of fame at TD Ameritrade Park in Omaha. Shortly thereafter a security guard absolutely trucked him and hauled him away to face the music for his antics.

If that does sound familiar to you that’s because pretty much the exact same thing happened to a fan during the Florida versus Louisville game at the 2017 College World Series.

Oh yeah, a fan was also arrested after running onto the field during an Arkansas game in the College World Series back in 2009 too! It’s like a Razorback baseball tradition, I guess.

Anyhoo, here is this year’s effort. Watch and enjoy as the College World Series security guard shows off better tackling form than 95 percent of the players in the NFL.

Pretty great, right? About the only thing better would have been in three girls had conspired with the internet to record themselves running onto the field at the College World Series. Which is something that actually happened in 2013.

End of the 6th, kayleigh torrie and I are running on the field. Watch for us

@mothafukaimhILL I don't know if you've seen this or not but I just saw it on a random Instagram hahaha pic.twitter.com/1pxsIbqsyl

I hope the guy that tackled me follows me. Shawty you was fiiiiiiine