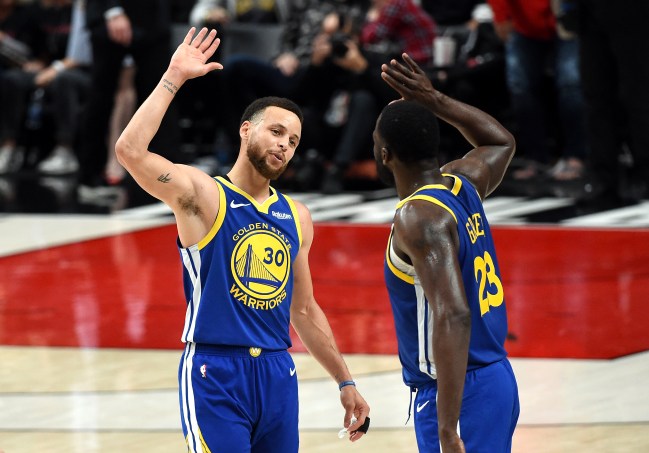 The Golden State Warriors are an absolute powerhouse of an organization. There’s the three NBA titles in five years. There’s the “death lineup” that head coach Steve Kerr created, which needs a makeover with new pieces this upcoming season, but still boasts tons of talent and mismatches to opponents. There’s the reputation for having one of the best front offices in all of sports. And now, there’s a new arena in San Francisco that’s supposed to be as state-of-the-art as it comes.

With the move across the Bay from Oakland to San Francisco comes a new look, with the team unveiling an updated logo earlier this year — which looks eerily similar to the old one — and, now, a fresh new look, with the Golden State Warriors dropping new uniforms today on Twitter.

I mean, the entire video was pretty dope, but the jerseys themselves are meh. Too boring up top, and the waist on the shorts are too busy for the rest of the uniform. Hey, that’s just my opinion, and I’m not style expert, so what the hell do I know?

As with anything new, social media made sure to share thoughts on the Dubs’ new threads, and, well, they weren’t received with a whole lot of fanfare. Take a look at some the critics on Twitter who were less than impressed with the updated look.

God I hate our uniforms. The normal one is awful. The Bay one is even worse.

Hate golden state, but how do you go from one of the cleanest looking unis in all of sorts to that San Francisco trash?

There’s no word as to how these new Warriors uniforms will be used, though. Is this the everyday look? Are they alternates? Are they like the Lakers’ Sunday whites that will only be worn on special occasions? That’s still TBD, as the team hasn’t provided much information other than a first look at the design.

According to the SF Gate, the Golden State Warriors were featured in a similar looking uniform on the video game NBA 2K20, which gave fans a hint that something like this could be coming.

The guess here is that the new Warriors uniform is nothing more than an alternate throwback that pays homage to the hoops history in their newest city, San Francisco, but, hey, we’ve seen teams decide to wear things like this more often than the primary look, so who knows how much we see guys like Steph Curry and Draymond Green in them this upcoming season? One thing’s for sure, most hoops fans won’t be excited whenever the team wears these things; based off the reactions above.