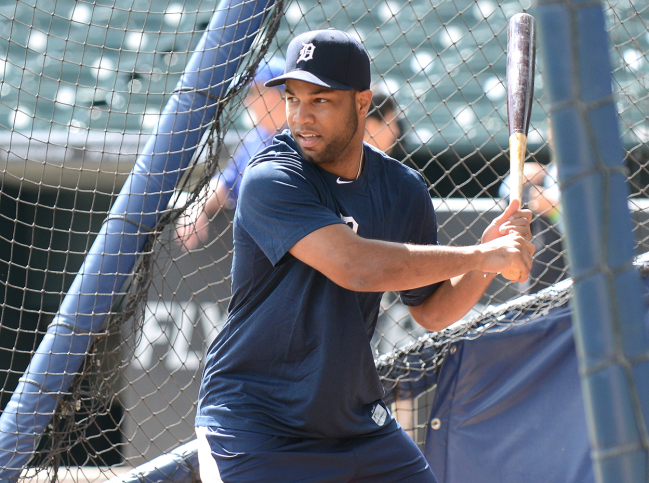 After 11 years in the NFL, Golden Tate is pursuing his first love— baseball. The former Seahawks, Lions, Eagles and Giants receiver stepped into the box for the first time since college on Tuesday night and got on base in style.

Tate, 33, was released by the Titans in January. Instead of signing a new contract with an NFL franchise, he decided to switch sports.

Prior to his lengthy football career, Tate was a two-sport star in high school and college. He was drafted out of high school in 2007, but chose to play baseball in college as well.

While at Notre Dame, during his sophomore season before hanging up his glove and focusing on football, Tate was very solid. He hit .329 in 55 games and scored the third-most runs in school history with 45.

After being drafted into the NFL by Seattle, Tate once again heard his name called in the MLB Draft. San Francisco took a flier on the Fighting Irish athlete, but he obviously chose to play football on the next level.

Now, 12 years later, he made his return to the diamond on Wednesday night. Tate signed with the Port Angeles Lefties of the West Coast League and started in centerfield during his impressive debut.

Starting line up for game one vs. the Bend Elks!

During his first at-bat of the year, and really his career, Tate ripped an RBI double down the first base line to open the scoring for Port Angeles.

In his first at-bat in the West Coast League, former Seahawks WR Golden Tate rips an RBI double to give the Lefties their first run of the ball game.

After reaching base, Tate celebrated humbly, but prominently. He stood on second base for a moment and stood deadlocked with his dugout before offering a strong salute.

And Tate wasn’t done there. He went 2-for-4 with that double, that RBI, and a stolen base. The Lefties beat the Bend Elks 5-2. It was about as good of a debut possible for someone who has not played organized baseball in 13 years.