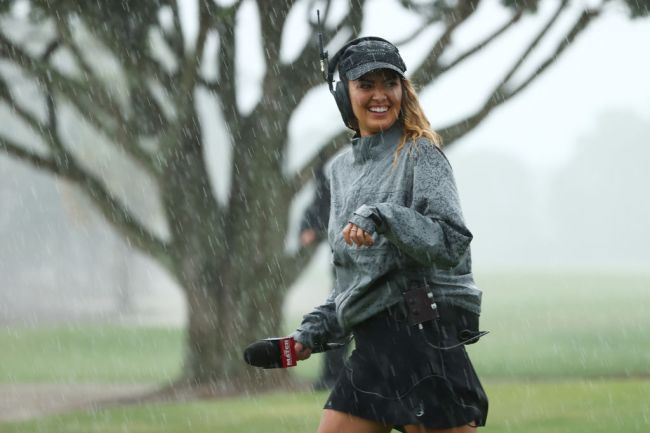 Amanda Balionis is extremely good at her job. She’s undoubtedly become one of the best interviewers not only in golf but sports in general. That’s not to say she didn’t have some growing pains when she first entered the golf world.

Balionis’ first major gig in golf came with PGATour.com where she conducted live post-round interviews and during the 2011 Tour Championship, a nightmare situation unfolded.

The 36-year-old recently joined the Subpar Podcast and explained that she often-over prepared for interviews and in this certain instance she had filled out index cards for each of the 30 players in the field that week.

Index Cards Were A Bad Choice

Her first post-round interview that day happened to be Dustin Johnson. So, she grabbed her index card and saw that she had written that the upcoming Presidents Cup would be the third of his career. Remember, this was in 2011, DJ was actually getting set to play in his first Presidents Cup, but she rolled with it, trusting her notes. This led to an awkward interview, obviously.

“I trusted that handy dandy index card,” Balionis explained “And I said to Dustin, I looked down at it, and I asked him something about the season and then my second question was, ‘Well, you know you are about to go tee it up in your third Presidents Cup. What have you learned from those past events that’s going to prepare you moving forward?’ And in true Dustin form, he looks at me and goes, ‘It’s my first.’ [Laughs]

“I was like, ‘Are you third in points?’” she continued. “I was just trying to figure out what I wrote. “

Just after that not-so-great interview was finished, Balionis is told that Phil Mickelson is walking off the final green and is going to stop by for an interview as well. She had never talked to Mickelson before, and interviewing one of the game’s greats minutes after a bad on-camera experience is a recipe for disaster.

The Mickelson interview did not go well, either.

“I look directly at the camera, and he doesn’t know me from anybody, and I look right at the camera and I’m like, ‘Thanks, Phil. Guys, your Phil.’ And he’s just like, no laugh, no anything. And he just stone-cold stared me down and was like this is never going to happen again. And then we did the interview and then I proceeded to have a massive meltdown in my car — and that was the last time I did index cards.”

Hey, you live and you learn. Now Balionis obviously laughs at those two moments as 10 years later she’s become a force in the golf reporting and interviewing world.