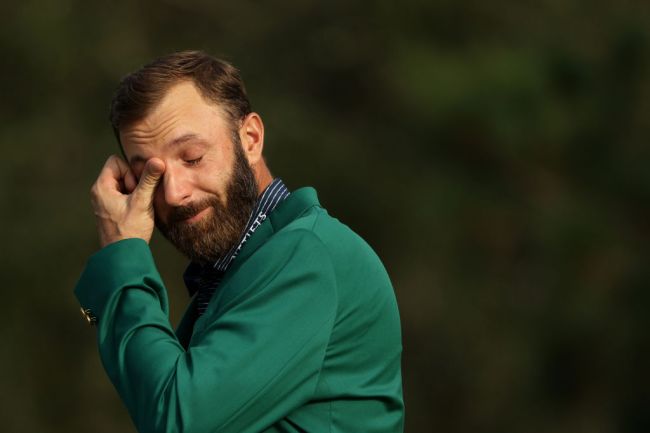 Seeing Dustin Johnson win a green jacket on Sunday wasn’t at all surprising. After all, he is the No. 1 player in the world and it was only a matter of when, not if, he would pick up the second major championship of his career. What was surprising was his post-round interview with CBS’ Amanda Balionis.

Just after tapping in for par on the 72nd hole on Sunday to post the lowest scoring total in Masters history, Johnson’s reaction was what we usually see from him after a win. We got a subtle fist-bump and a quick smile, but that was about it. It was actually his younger brother and caddie, Austin, who began crying.

Dustin Johnson didn’t show any emotion after winning the Masters by 5 (no biggie), but his brother and caddie Austin did. Awesome moment.pic.twitter.com/qkJGZ7GWcM

After the green jacket ceremony and a quick photo-op, DJ stood with Balionis for a quick interview to close out the broadcast and that’s when it all hit him. Johnson couldn’t speak as he realized one of his childhood dreams had just become a reality. DJ showing that sort of emotion really surprised Balionis.

“Very (surprised),” Balionis told The Big Lead. “I’ve been interviewing Dustin since I started covering golf in 2011 and you kind of know what to expect. He’s going to answer the question that you ask and he’s going to underplay his performance and always chalk it up to executing and being in command. When he’s not playing well, he’s very honest about that too but he’s generally unemotional. Even when he won his first major there wasn’t a lot of emotion.

“I think what happened, though, is he was wearing the green jacket on the practice putting green, (2019 champion) Tiger (Woods) had just put it on him and it really just hit him in that moment that he’d accomplished his childhood dream.”

You don’t see Dustin Johnson show much emotion, ever. Him crying and not even being able to speak shows how much this Masters win really means. pic.twitter.com/PzPkIkDpTA

That’s what winning a green jacket does to people, even those that never, and I mean never, show that sort of emotion on the golf course.