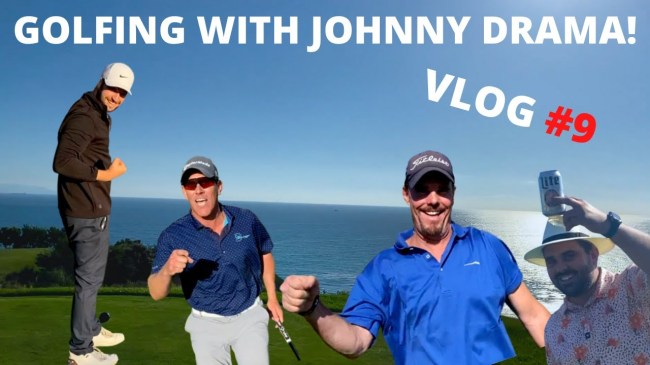 The Brilliantly Dumb Show dropped a very interesting vlog this week as we went out golfing with my favorite character in the history of television, Johnny Drama. Kevin Dillon instantly became a crowd favorite and won the hearts of ‘Entourage’ fans worldwide in his role as Vinny Chase’s brother, Johnny Drama. His performance was spectacular and a huge reason as to why the show was able to live on for eight full seasons plus a movie.

Before I started this podcast if you would have told me I would have a chance to go play golf with the man himself I would tell you that you were absolutely nuts. But sure enough, after my interview with the cast of ‘Entourage’ earlier in the year, we both agreed that we would have to get a round in together. Boy am I happy we did because the memories and the content that came from it is as good as you could imagine.

A good friend of the pod Joey Cold Cuts, Kevin Dillon, golf professional Jordan Thomas, and I took on 18 holes in Palos Verdes, California. The round was filled with beers, laughs, and some pretty decent golf that was all captured for the vlog. I can honestly say it was a round that I will never forget and after it all, we made sure that there would be more golf to come for the four of us.

Be sure to subscribe to The Brilliantly Dumb Show on YouTube to catch the full vlog with the Entourage legend himself, Johnny Drama.