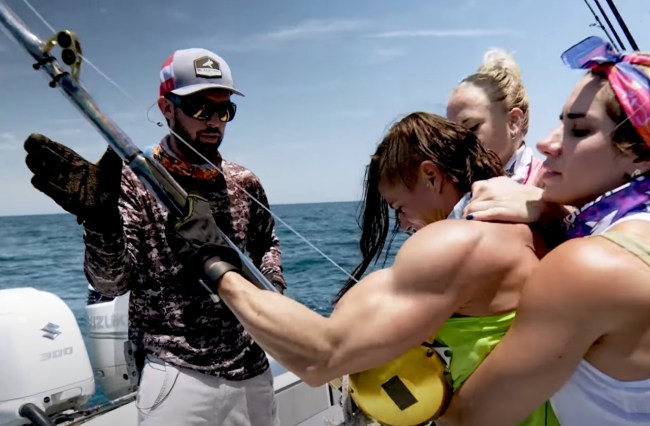 Goliath Grouper grow to absolutely gargantuan sizes. They are a protected species that are able to pretty much grow unchecked in Florida. They show up on a bountiful reef and eat everything in sight before moving onto the next reef and they continue to do this until they weigh up to 1,000-pounds and measure 8-feet-long.

Josh from BlacktipH, the largest fishing channel on YouTube, has become a bit of a specialist when it comes to targeting and catching Goliath Grouper and he’s gotten really good at taking famous personalities including athletes, YouTuber celebs, and influencers out to catch these dinosaurs.

For his latest video, he’s brought out three of the strongest women in the world to tackle these giants. Fishing for these Goliath Grouper using stand-up tackle are ‘Stephanie Cohen (one of the strongest female powerlifters in history), Sarah Backman (8x world champion arm wrestler), and Kristen Nun (fitness and social media celebrity)’.

Using stand-up tackle means they have to put their legs and back into the fight (and arms, obviously) and can’t just rely on a fighting chair to help with a lot of the work like you’d do when fighting 1,000+ pound billfish. Watch as these ladies who could snap me in half like a twig do battle with some of the strongest fish on the planet:

Oddly enough, I’ve never caught a Goliath Grouper over 200-pounds despite seeing these 500+ pounders my entire life. You even see them in relatively shallow water sometimes. We’d spot them spearfishing and snorkeling/diving bridges or shallow water wrecks but you can’t touch them so there was never any sense in fighting them unless we wanted to risk breaking some rods.

It’s pretty awesome that BlacktipH has been able to raise the profile of these fish by sending tens of millions of YouTube views their way so the species is slowly becoming a household name amongst the fishing community.