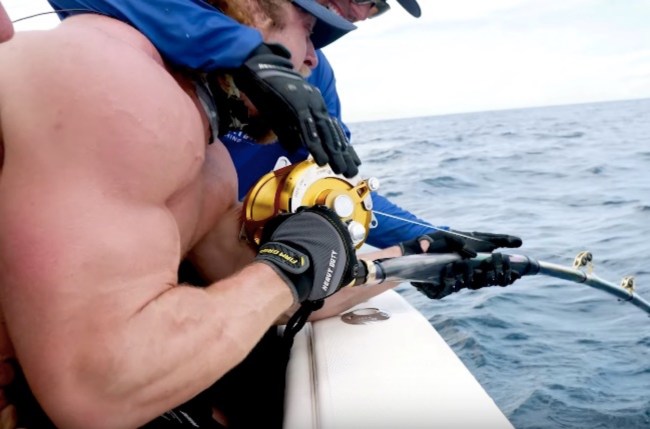 This is a pretty cool clip from Josh at BlacktipH. He’s gathered some heavy hitters from the world of weightlifting to let them fight some of the biggest and most powerful fish in the ocean, Goliath Grouper. These fish often weigh hundreds of pounds and they fight like hell.

The thing about fighting giant fish is it’s not so much about your arms, it’s all in the legs. But here we see Devon Larratt who is a World Arm Wrestling Champion and ex-special forces, Layne Norton who is World Champion powerlifter and fitness expert, and JujiMufu who has 1.4 million followers on Instagram and is huge in the fitness world.

I haven’t caught a Goliath Grouper in years, mostly because I broke the rod I used to use to fight these fish. You need HEAVY tackle to haul them in. And like most species of Grouper, they pull like their life is on the line until they reach a breaking point then they roll over and sort of give up, but getting them to that point of defeat can be nearly impossible sometimes.

The IGFA all-tackle record for Goliath Grouper (formerly known as Jewfish) is 680-pounds. That fish was caught on rod-and-reel in Fernandina Beach, Florida (aka Amelia Island) back in 1961 by a woman named Lynn Joyner. These fish aren’t quite that big but they’re still enormous.

Tomorrow it’s going down! @jujimufu, @devlarratt and @biolayne battle one of the strongest fish in the ocean stand up style! #blacktiph #fishing #monster #florida #offshore #hookedup 📷 by @dan_decibel

You can’t keep Goliath Grouper in Florida. They are one of the most protected species out there because there was a time (decades/generations ago) when they were almost fished to extinction. Anyone with a diving mask can tell you the population numbers have rebounded and they are EVERYWHERE off the coasts of Florida.

The Goliath Grouper is known for showing up on a healthy reef and eating everything in sight, then moving on and doing the same at the next reef. They’re so large they can completely devour a healthy ecosystem and without the ability to keep these fish they continue to grow. Eventually, they’re so big the sharks don’t even bother with them.

By the way, I know that’s a longer clip so feel free to jump around on the YouTube video. Like most great fishing videos, this one appears to be chopped up so it gets increasingly better with the fish getting larger with each catch.

If you are looking for more awesome fishing content, we’ve got you covered. Check these out:

If you gentlemen ever have any tips on fishing videos/news that you want to send my way you can always find me on Twitter at @casspa or email me at cass@brobible.com!