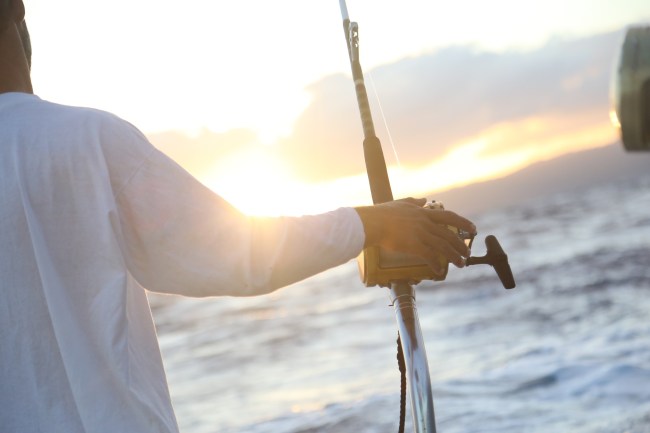 The 2018 White Marlin Open had 382 boats entered into the tournament with 3,000 anglers. So there are A LITERAL SHIT TON of fishermen off the coast of Maryland this week practicing for the 2019 White Marlin Open and a potential shot at millions of dollars (for fishing!!!).

One fisherman appears to have hit the jackpot too early when he reeled in a record-breaking 72.8-pound Mahi-Mahi while fishing above Poor Man’s Canyon. This broke the 34-year-old Maryland state record for Mahi-Mahi which was set by angler by Kim Lawson when she reeled in a 67.8-pound dolphin. So not only did angler Jeff Wright break the existing record but he absolutely destroyed it.

Jeff’s already received press from just about every publication on the East Coast that covers fishing and for good reason, this Mahi-Mahi was ENORMOUS.

The bad news is the chances of breaking that record on two consecutive weeks after the state record stood firm for 34-years is slim to none.

The good news is Mahi-Mahi is arguably the fastest growing fish in the ocean and there are probably a billion more out there off the coast of Ocean City waiting for anglers to catch next week during the 2019 White Marlin Open.

In addition to being one of the 25 Best-Tasting Fish on the Planet, Mahi-Mahi are voracious eaters. They’ll eat just about anything that moves in the ocean. Don’t believe me? Check out this one which was recently discovered to have THIRTY TWO baby sea turtles in its stomach:

As for this Maryland State Record 72.8-pound Mahi-Mahi caught by Jeff Wright, it sounds like it was one hell of a fight:

“It literally took 25 minutes to get this in,” Wright said. “I had to play it until it finally gave up.”

“It’s really exciting to see anglers like Wright break records that have been on the books for decades,” Recreational Fishing Outreach Coordinator Erik Zlokovitz said. “It just shows that with a little patience you could find yourself a part of Maryland’s angling history.” (via)

Jeff said when this Dorado hit the line his reel started screaming and it took nearly half an hour to fight this fish and get it in the boat.

This 72-pounder is nearly double the biggest Mahi-Mahi I’ve ever caught which was somewhere in the 40-pounds. I’ve only caught Mahi-Mahi on a dozen or so occasions but it’s always one of the most fun type sof fishing there is because when there’s one dolphin (fish) there’s A LOT of them. You can often just leave one hooked next to the boat and the entire school will stay around so you can catch all of them and fill the cooler.

For more on this fish, you can click here to visit Fox News.