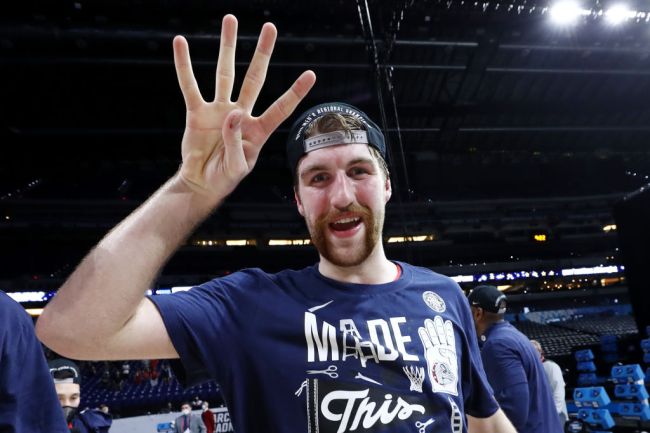 Drew Timme is a legend. Gonzaga is headed to the Final Four after beating USC by 19 in the elite eight and the Bulldogs’ 6-foot-10 center had everything to do with it. Timme dropped 23 points and recorded five rebounds, but the highlights of the night came after the play, as they have all tournament. He continued to etch his name in March Madness history alongside players like Kevin Pittsnogle, Adam Morrison, Gerry McNamara, Sherwood Brown, Bryce Drew, Salim Stoudamire, Ali Farokhmanesh, and many others.

Drew Timme is the guy that she told you not to worry about pic.twitter.com/RpCIxK95sQ

The Zags started hot with with a 25-8 lead to open the game and never looked back. Just over five minutes into the game, he dunked in transition and brought out his signature “Drew-manchu” celebration, where he combs his mustache and points to the sky. Moments later, he forced a turnover, recovered the steal and took it coast-to-coast-. It was early, and he was already feeling it.

Timme had thirteen points in the first 10 minutes and out-scored the Trojans by himself. He pulled out the Jordan shrug IN THE FIRST QUARTER!

As the game went on, he made Evan Mobley, one of the NCAA’s top interior defenders, look silly. Timme dominated USC’s superstar freshman all night and flexed on everybody in the second half. What a boss.

While flexing, ‘staching (?), and shrugging in the first half are epic, his best celebration of the night came late in the second half. Timme dropped a wicked dish into the paint and set up the easy two. He figuratively “dropped a dime” and literally picked it up.

Timme picking up the dime he dropped 👀😂@ZagMBB #MarchMadness pic.twitter.com/Z9uF3qtPbO

This was not the first time he brought out the incredible antics. He has been doing it all year and even has a celebration for taking a charge.

This dude Drew Timme really has top-tier celebrations for everything 🤣 @drewtimme2 pic.twitter.com/uAvZTt2OjA

Come for the Drew Timme dunk, stay for the raise the roof celebration. pic.twitter.com/35YzVBKmVu

You’ve got to love Drew Timme and his celebration moves 😂! pic.twitter.com/CqO2cddIFt

The man and his mustache have captivated the nation.

We almost didn’t get to see the Drew-manchu in the Elite Eight, but Timme wasn’t shaving the mojo.

Drew Timme's mom said he has to shave his mustache if Gonzaga made the Sweet 16 😂 pic.twitter.com/U4QmdIwtPn

While much of the country is getting to know him for the first time as he helps lead the Zags to the NCAA Tournament semifinals, he has been hilarious since high school.

The Bulldogs are now the third team to reach the Final Four with an undefeated record and they look hard to beat. UNLV lost to Duke in 1991, Kentucky lost to Wisconsin in 2015, and now Gonzaga will look to change that narrative. Welcome to the Drew Timme show.