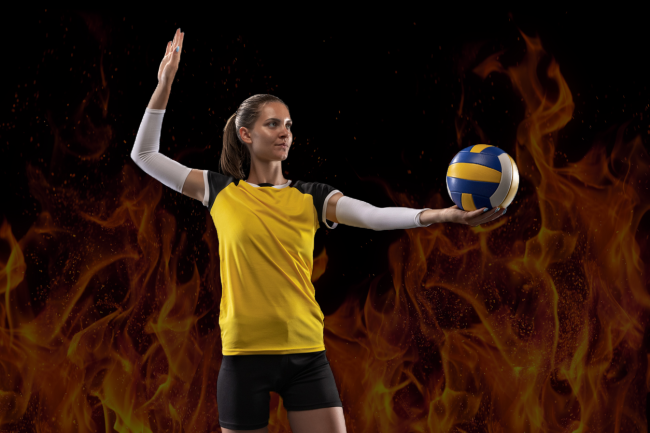 Lucas previously served in the same role at Arkansas-Pine Bluff and Alcorn State but returned to her alma mater in 2022. Upon arrival in Lousiana, she took inventory of her roster and decided that she needed to make sweeping changes.

The extent to which she shook things up, however, was wild. It was absolutely vicious and it ultimately got her fired.

By the end of March, less than two full months after being hired, Chelsey Lucas had cut all 19 players from Grambling State’s volleyball team.

All 19 players were cut. They not only lost the chance to play at Grambling, but they also lost their scholarships.

In a tell-all interview with USA today, the Tigers players spoke out about what happened:

“In the weeks following her appointment, Lucas’ cold nature with the players continued. They only had three practice sessions together, most of which consisted of very few volleyball related drills and a lot of punishment-related running, according to multiple players…

…Most players and parents around the program feel Lucas and the athletics department’s decision to cut the roster was premeditated given the circumstances that led up to it.”

As soon as Lucas took the new job and left Arkansas-Pine Bluff, a number of her former players entered the transfer portal. The players who were cut at Grambling saw the portal movement as a signal that the new coach wanted to bring her players with her.

Lucas informed the athletic administration that she would be making changes to the roster. Grambling State was in support of the move initially.

The school went so far as to dispel rumors.

“I want to provide some fact. I’ve been told, and again I’ve only spoken to two student-athletes, one prospective and one current, that Coach Lucas is bringing an entire team is inaccurate,” said Trayvean Scott, Vice President of Intercollegiate Athletics at Grambling State. “My belief is it is four or five young ladies. I think the tone and tenor is that she cut the entire team, in fact, she intended to keep four or five.”

“The decision, it’s her decision to make, and she’s got some quality players coming on board. I think 14 or 15 coming on board at some point, so in terms of things, I hate to say out with the old, but in with the new a little bit,” Howard said. “Obviously, we don’t want them to be cut or lose their scholarships or whatever that might be or whatever that might look like.”

“At the end of the day, Coach Lucas has a goal has a vision. We have a goal as an institution and a vision as well to win, and that’s first and foremost.”

However, that narrative must have changed.

Chelsey Lucas was fired as head volleyball coach at Grambling State on Tuesday as result of an internal investigation within the program.

In response to the decision, Lucas was frustrated. She released the following statement after news of her dismissal was released.

“Since I started at Grambling, I have been ordered not to speak to the media. My voice has unfortunately been silenced despite the rumors and accusations about me. As a result, I have not been able to provide my side of the story about the many events that have occurred during my tenure as head volleyball coach at Grambling. I was told today, without notice or any opportunity for discussion, that I was being terminated. When I asked why I was being terminated, the administration was not able to provide me any details about why they decided to fire me.

This situation between Chelsey Lucas and Grambling State is surely set to continue.

Lucas and the university will likely go back and forth over finances, termination, etc. It may even end up in court.

Either way, Lucas is currently without a job. Grambling is also without a coach.

As for the players, they have been invited to return. All volleyball student-athletes who received scholarships for 2022-23 academic year are invited to remain on the team. They also retain their scholarships. Walk-ons will also continue to hold their roster spot.