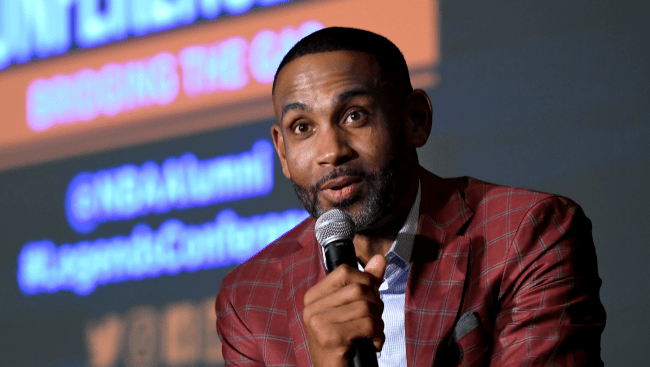 19-year old Myla Hill, the daughter of NBA Hall of Famer Grant Hill and his wife Tamia, made her amateur mixed martial arts debut on Friday in Lakeland, Florida.

Hill made quick work of her opponent Jenna Loza, locking her up with a very impressive rear-naked choke in the first round of their fight at Rival Fight League: Halloween Havoc.

“What a performance by @MylaHill,” tweeted Orlando Magic guard Michael Carter-Williams, who was in attendace and filmed Myla’s fight. “Her first amateur fight was a classic! She’s just getting started! Let’s Go champ!”

What a performance by @MylaHill her first amateur fight was a classic! She’s just getting started! Let’s Go champ! pic.twitter.com/8ZuJKQADDF

MMA Fighting reports Myla Hill, a full-time college student, has been training at Gracie Jiu-Jitsu affiliate The 6 Levels, located just outside of Orlando.

Her dad Grant tweeted out just how proud he was of Myla’s performance on Tuesday.

“4 days later, and I’m still in awe of my daughter Myla’s performance in her first amateur MMA fight,” Grant Hill wrote. “She was focused, composed (which her mother and I were not before & during the fight), aggressive & clearly not afraid of the moment inside the octagon. #TeamMyla #ProudDad.”

Grant also stated that he is “proud of how much hard work and dedication she’s put into this with the guidance of John Burke and his @6levels team. Her commitment and discipline, along with her love of the ‘grind,’ has been truly been inspiring. I knew she’d defeat her opponent when her walkout music.”

Myla, a purple belt in Gracie jiu-jitsu, shared some photos to Instagram of her post-fight celebration with her dad, Michael Carter-Williams and her trainers at The 6 Levels.

“Proper preparation prevents poor performance,” Myla wrote after the fight. “Got the job done. Blessed to have these amazing people in my corner and by my side!”