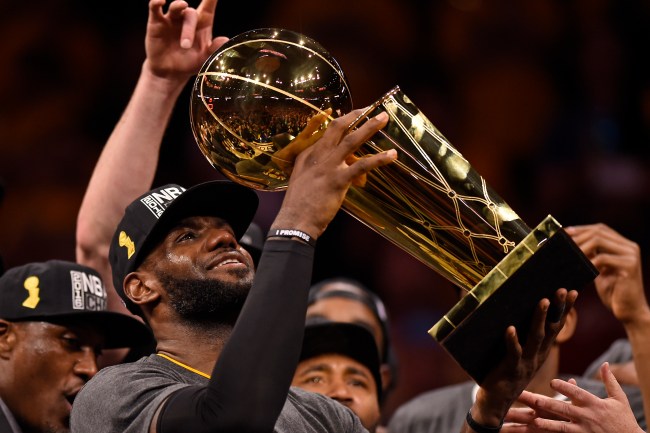 The greatest sporting events of the past decade can be pretty damn difficult to break down. Between the heartbreaking losses in title games, to top individual performances, to epic overtime thrillers that fans are still talking about years later, trying to decide which ones are rewatchable over and over isn’t easy.

But, hell, with all of us stuck in quarantine due to the ongoing pandemic, I figured I’d give it a try because, shit, what else is there to do?

With pretty much all live sports currently on hold, there are some TV networks out there that are replaying some of the greatest sporting events for fans to get all those emotions again, trying to remind us of all the good and bad times. Since there’s no drama like the unscripted drama of sporting events, here are the top games I want to see replayed while we’re all stuck inside and social distancing — so grab some brews and post up on your couch for a few hours, ’cause these are sure to bring back memories.

What happens when a starting quarterback with a career 26-2 record struggles through the first half of the National Championship Game? If you’ve got the balls and accolades of Alabama head coach Nick Saban, you pull the kid in favor of an up-and-coming true freshman to try and turn things around.

That’s part of what makes the 2018 title game between the Tide and the Georgia Bulldogs so epic. But the fact that Saban’s gamble then paid off when that replacement for Hurts, Tua Tagovailoa, threw the game-winning and title-clinching touchdown in overtime makes it so much more amazing.

Just when every college football fan thought mighty Bama would fall to an SEC rival on the biggest stage, Saban pulled a rabbit out of his hat to spark a remarkable comeback, which ended up being one of the greatest sporting events in recent memory.

9. Conor McGregor-Nate Diaz Rematch: A 5-Round Classic At UFC 202

The Conor McGregor-Nate Diaz rematch was the greatest UFC fight during the past decade; don’t @ me.

Lasting an excruciating five rounds, both MMA fighters’ endurance, mental toughness and physical strength were tested, with McGregor ultimately getting revenge from their first fight to capture the Welterweight title.

Breaking the record previously held by UFC 100 for the highest selling pay-per-view in UFC history, 1,650,000 buys, it’d be pretty dope to do nothing but watch these two go back and forth trading blows for five full rounds. Yeah, that’s not a bad way to scratch our sports itch during this damn quarantine.

Upsets like this just don’t happen, guys. No, really, like they never, ever, ever, in the history of mankind ever happen. Of course, until they actually do.

Sure, there are plenty of incredible memories from March Madness over the past decade, but why not sit back and watch something that has never happened in Men’s NCAA Tournament history from start to finish: A 16-seed beating a 1-seed.

The UMBC Retrievers happily busted everyone’s bracket in 2018, not just beating the Virginia Cavaliers, but absolutely embarrassing them, making a damn statement by winning the game by 20. And, if you watch the game on replay today, you’ll see moments where you think UVA may just go for a run and close the gap — as typically happens — but UMBC never let up, and they shocked the world to earn their one shining moment forever.

7. Malcolm Butler Picks Off A Super Bowl XLIX Title For The Patriots

What the hell were the Seahawks doing? Why didn’t they hand the ball off to their bulldozer of a running back, Marshawn Lynch? How did the refs not call pass interference on the Pats’ Malcolm Butler? Who could foresee any of this coming?

What transpired in the final seconds of Super Bowl XLIX is beyond incredible, and it’ll forever go down as one of the greatest sporting events in NFL history.

Like all unforgettable championship games, this one had its peaks and valleys, with both teams trading body blows until one team and one player made the clutch play to win it. That player was Butler, who sneakily jumped a route on the goal line to steal an interception and prevent the Seahawks from repeating. Who knows what happens to New England’s dynasty if this one thing doesn’t happen, but wouldn’t it be fun AF to watch from start to end to at least wonder?

6. 2016 World Series: The Game 7 That Ended The Curse Of The Billy Goat For The Cubs

After over 100 years of waiting, the Chicago Cubs had done it: They were finally World Series champs — but it took extra innings on the road to break the “Curse of the Billy Goat.”

Up against a franchise who was just as title-starved as them, the Cleveland Indians, the Cubbies came out victorious in one of the most wild postseason games in MLB history. Seriously, the tension and drama was next level throughout Game 7 of the 2016 World Series, putting fans from both teams on a roller coaster of emotions.

Even if someone weren’t able to watch whole game, just picking it up in the 8th inning when Rajai Davis hit a two-run homer off Cubs closer Aroldis Chapman to tie the score packs enough craziness. Soon to follow was a rainout, a dead center homer, and, ultimately, a Chicago Cubs win.

Everyone loves a good underdog, and there was almost no bigger one than Leicester City in the Premier League back during the 2015-16 season.

With a wild 5000-to-1 odds to win the league title that season, the club strictly wouldn’t accept anything but a championship. There are tons of moments through the title-winning run that could be replayed, but how about that draw versus Aston Villa that pushed Leicester City into first place for good, shocking the sports world and giving the Foxes their first EPL title ever.

Oh, you don’t like watching soccer? Screw you, because these type of unbelievable victories are what makes sports great.

On This Date: Deshaun Watson found Hunter Renfrow to give @ClemsonFB the title 🏆 pic.twitter.com/G62Vmh0Lqp

The College Football National Championship is always the first title game of every new year — and 2017’s version between the Clemson Tigers and Alabama Crimson Tide gave sports fans a big start to the month.

Bama was looking for its second-straight national title, hoping to repeat by beating Clemson and star quarterback Deshaun Watson once again — but Watson went deep into his bag of tricks to make sure it didn’t happen.

Finding the heart and soul of the Tigers in the final seconds of the game, wide receiver Hunter Renfrow, Watson’s game-winning touchdown will forever be remembered as one of the best in college football history. Those chills on the back of your neck while watching this? Yeah, those are normal.

3. Tiger Woods Wins His Fifth Green Jacket At The Masters

The Tiger King had finally returned to Augusta.

Sure, Tiger Woods had won the 2018 PGA Championship, marking an unbelievable comeback from years of injuries and inconsistency, but when he won his fifth green jacket at the 2019 Masters it was a statement. It was a moment sports fans will never forget.

The entire country seemed to applaud Woods’ achievement, with his fellow golfers even amazed that the former No. 1 player in the world was capable of doing what he did during a four-day stretch last spring. Give me all four rounds of this and let me cry solo on my couch.

“CLEVELAND, THIS IS FOR YOU!”

When LeBron James yelled those five words while weeping on national TV, sports fans everywhere just couldn’t help but get chills. “The King” had returned to Cleveland a few years earlier to try and win a championship for his hometown state, doing so in dramatic fashion.

Overcoming a 3-1 series deficit in the 2016 NBA Finals to a Golden State Warriors team that won a record 73 regular season games, James and his Cavaliers proved they had more heart than just talent.

From the block by James, to the shot by Kyrie Irving in the waning seconds, if you love sports, this game’s what it’s all about.

I think we could all use a little unity right about now, don’t you think?

The earliest candidate on this list of the greatest sports moments I want to rewatch during quarantine also happens to be my favorite moment.

With the U.S. men’s soccer team in need of a win over Algeria in the group state of the 2010 World Cup, things looked bleak for much of the match. The Americans were frustrated all day, with their opponents happily sitting back and playing for a draw.

With U.S. goalie Tim Howard tossing a perfect outlet to captain Landon Donovan, the red, white and blue showed their fucking American pride with a goal in the final minutes, leading the game’s commentator, Ian Darke, to say, “You could not write a script like this!”