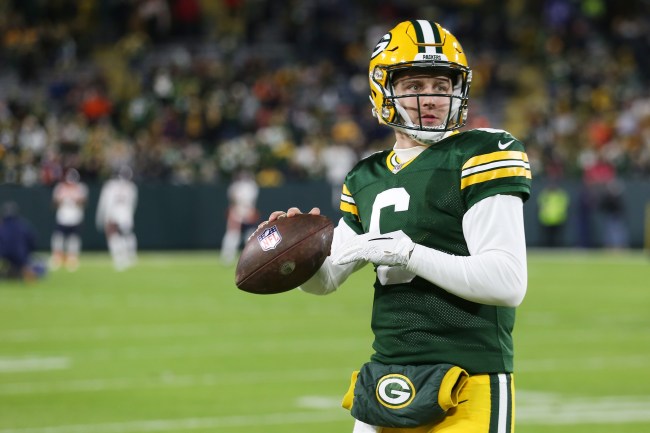 For some, their first appearance on an NFL field is a key moment in their life. It’s a lifetime of work finally paying off. For Kurt Benkert, it was an opportunity for his wife to absolutely destroy him in a pair of texts.

With the Green Bay Packers ahead 45-30 late in Sunday night’s game against the Chicago Bears, Benkert was called into action. Starting QB Aaron Rodgers came to him and asked if he like to kneel out the game.

Benkert saw the opportunity as an honor and went out to take his first NFL snaps. Two kneel downs later, the Packers win was official. Benkert did the world a favor after the game and tweeted out a picture of the winning knee.

Unfortunately, Benkert’s wife was not so impressed with his heroics.

Text from my wife after the game. Assault. pic.twitter.com/epSMcWpNj5

It took just 6 words for Benkert’s wife to absolutely roast him and his big night. It’s the kind of roasting that could only come from a loved one.

It would appear ESPN wasn’t any more impressed with him than his wife. They couldn’t even identify him for the stat sheet on Sunday.

Kurt, who do we have to write to at ESPN about this? pic.twitter.com/64sw8jryTb

Benkert ended up in this position because Jordan Love was placed on the COVID list. Benkert had impressed the Packers staff enough to get called up from the practice squad in Love’s absence.

He’ll likely be headed back to the practice squad this week when Love returns, but he’ll at least always have the memory of that kneel down and getting roasted by his wife for it.