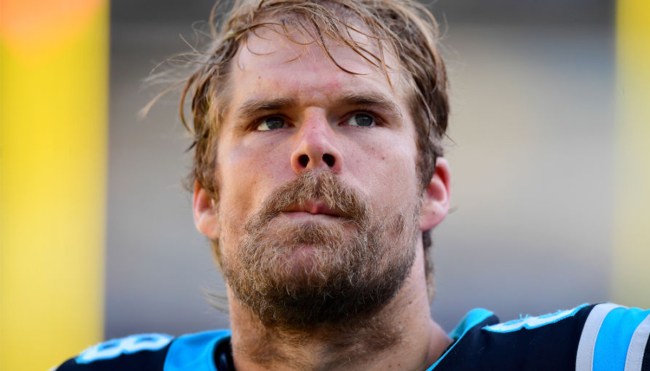 The NFL Draft has the potential to make or break the future of a franchise, so it’s not exactly shocking that teams pour a ton of resources into evaluating prospective picks and do their due diligence to ensure they’re working with as much information as possible in order to maximize their chances of making the right call.

The bulk of a player’s report card is typically based on their combine performance, scouting reports, and other tangible evaluations of their talent. However, it’s rare for a team to scoop up someone without having them sit down for an interview where they can get a better read on their character and focus on some intangibles that may otherwise be overlooked.

Those meetings have spawned some very interesting interactions over the years thanks to some of the unconventional tactics teams have dreamed up to see how guys react under pressure and when confronted with unexpected situations—like being challenged to drill shots on a miniature basketball hoop and fielding inquires about how many testicles they have and if they think they have a hot mom.

That was just one of a few topics I addressed when I got the chance to chat with Greg Olsen, who’s linked up with Bud Light ahead of the 2022 NFL Draft to give fans a chance to win $15 million if they can correctly predict every single pick in the first round this year.

During our conversation, the retired tight end revealed he fell victim to a sneaky movie Eric Mangini pulled that led to a fairly awkward meeting with the New York Jets during a pre-draft meaning in 2007. He also shed some light on the biggest purchase he made after signing a rookie deal, how he dealt with the pressure leading up to the big day, and shared his thoughts on what could unfold when the festivities kick off on Thursday night.

BroBible: Before we dive in, can you tell me a bit about what you’re doing with Bud Light ahead of the draft?

Greg Olsen: I’ve teamed for the Bud Light Perfect Draft. It’s a promo where if you can pick all 32 first-round picks in order, you’ll win $15 million.

We’ve done this now for the last few weeks and people have loved it. You’re going to have to really study and really understand the draft. I’ve filled out mine, so fingers crossed.

This year’s draft is probably one of the most unpredictable ones in recent memory. It’s going to be hard to be truly shocked by anything that unfolds, but do you see any major surprises coming out of the first round or two?

I actually think that’s what makes it fun.

When I sat down and filled out my perfect draft, you start almost making up trade scenarios; the trade-downs and trade-ups. We’ve covered this now for the last six months to the nth degree. You kind of know who will be selected within the first 10 picks, so the draft is more of a formality. I think what makes this year exciting—and why so many people are interested in it—is because there’s a little bit of uncertainty. I think that’s what makes it so entertaining.

Until that name is called, I don’t think anyone really knows even who’s gonna be the first pick—let alone the ninth—so I think that’s the exciting part and why people have enjoyed kind of taking on this challenge.

We have quarterbacks that could go as high as the top five or six, or they could go in the bottom third of the draft. It’s kind of a draft dominated by offensive tackles and defensive ends and pass rushers; there’s not really that marquee quarterback.

I’m looking forward to watching the draft on Thursday, I think it’s always fun to see what that next crop of rookie talent coming into the league is, like anybody else, who’s a fan.

One of my favorite aspects of the draft is players sharing stories about meetings with teams who had unconventional strategies to sort of vet them at the combine or in sitdowns before it kicks off. Did you personally have any weird experiences when you were gearing up in 2007?

Most of it was straightforward. It wasn’t anything completely outside of the norm.

One story that I do remember is I was meeting with the Jets. Eric Mangini was the coach at the time. I walk in and there’s like a room of 25 or 30 people. There’s scouts, there’s coaches, there’s front office personnel. You go around the room and you introduce yourself, so you maybe shake hands with 15 to 20 people.

Then he said, “Well, what’s my name?” I got that one. I got like two of the eight people he asked me. I walked out of that room and I was like, “I don’t know if anyone else did great on that, but I did really s—ty. I don’t think the Jets are gonna draft me.”

I waited all that time for that meeting and the first 10 minutes of it were quizzing me on people’s names.

On the bright side, you didn’t have to play for the Jets.

This was probably a bit easier to do 15 years ago, but did you have to stop yourself from looking at mock drafts and projections? It’s much more difficult to avoid these days thanks to social media, but I’m curious about how you dealt with that.

At the time, the ESPN mock draft with Mel Kiper kind of dominated that world. There weren’t a million websites, there wasn’t Twitter or Instagram or social media to the current degree, but they were still pretty prevalent.

I remember the night before the draft, I was at Monty’s in South Beach having dinner with my family and ESPN’s mock draft was on. We’re sitting there living and dying with every pick. It wasn’t even the real thing, but you couldn’t help but look.

Everybody wanted to see where they were projected to go and the teams they were connected to. You would kind of compare that to your own experience and who you met with and what teams came to your pro day. You could drive yourself crazy.

Do you remember where you were projected to go?

The Jets were a popular name. I guess no one knew about that meeting.

It’s funny. What happened was the Jets were actually a reasonable destination.  They were somewhere in the 20s and the Panthers, coincidentally, were something like 14. On the day of the draft, Darrelle Revis fell, so the Jets traded up with the Panthers and they flopped picks. That took them out of the equation.

There were a couple of teams—including the Bengals—that were in the late teens that had met with me, but that didn’t happen. Then, the Panthers actually took a teammate of mine, so they were off the board. It just kept kind of falling, and then, the Bears were there at 31. I was fortunate that they selected me.

After you signed your initial deal, did you make any purchases to treat yourself?

Not really. I had a car from college that my parents got me, so I just kept driving that truck. My wife now—who was my girlfriend at the time—was coming out of school and we moved together to Chicago.

The summer after I got drafted, I did buy a house up there by the facility in the north suburbs of Chicago. So, I’d say that was probably the big purchase.

I’m sure there was some stupid stuff in there. Trust me.

During your rookie year, did you encounter a sort of “Welcome to the NFL” Moment either in training camp or one of the games you played in?

When I got to Chicago, they were just coming off the Super Bowl. They had lost to the Colts a few months earlier, so they were really good.

On defense, they had Brian Urlacher, Lance Briggs, Charles “Peanut” Tillman, and Tommie Harris. They were loaded. I remember my first couple of practices at training camp. You’re anxious to get in there with the first team; you’re a rookie and you’re like, “I want to earn my stripes.” Then, you take some reps and you’re like, “Well, it’d be a little bit easier if I just ran with the second team, because I wouldn’t have to go against the first-team defense.”

Those were great challenges. It was a great learning curve for me to not find just easy success and really have to earn my way against some of the best players in the league every single day before we even got to a pre-season game—let alone the regular season. It was really good for me as a young player to be on a team that had such talent on defense early on.

On the flip side of the coin, was there any moment where you were like, “Okay, maybe I have what it takes to hang?”

In training camp, you could have one catch in the two-minute drill with the first-team offense and you go to bed that night feeling pretty good about it. Then, the next morning, you could have a tough one.

That’s kind of the life of a rookie. I can look back on it now with some perspective. My advice to younger guys would be: Don’t live those ups and downs. Don’t think when you make a great play or have a great practice that you’ve arrived, but also don’t think when you struggle that you can’t do it.

When I think back to what I was like when I was 20 years old, as a rookie, I probably did just that. It’s just human nature. There were some moments where I felt like I had a good showing my rookie year, and then other games or other times where I didn’t do a lot.

It was a very traditional rookie year. It wasn’t anything spectacular, but I was able to contribute and have my moments.