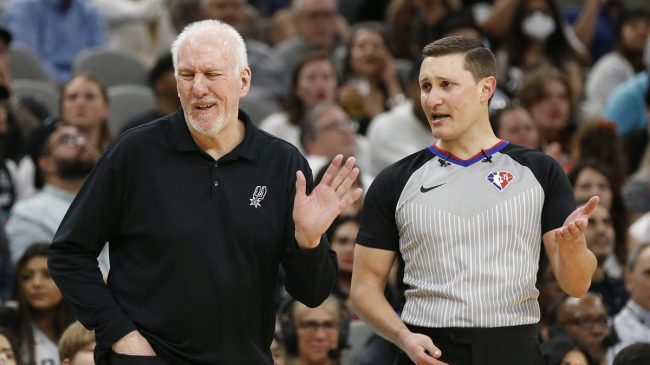 The San Antonio Spurs underwent a massive facelift in the NBA offseason. The storied franchise traded away star Dejounte Murray to the Atlanta Hawks in a blockbuster deal.

San Antonio then moved additional pieces acquired into the deal, including shipping forward Danilo Gallinari to the Boston Celtics.

Those moves come after a season where the Spurs went just 34-48 and lost in the Western Conference play-in round to the New Orleans Pelicans.

Many are theorizing that San Antonio is trying to tank for 2023 NBA Draft prodigy Victor Wembanyama. While legendary Gregg Popovich would never say as much, he doesn’t seem all that confident in his group heading into the new season.

The Spurs currently have the joint second-worst odds to win the NBA championship in 2023 according to DraftKings Sportsbook.

The site lists San Antonio at 1,000-to-1 to win the Larry O’Brien alongside the Utah Jazz, Oklahoma City Thunder, Orlando Magic and Indiana Pacers. Only the Houston Rockets at 2,000-to-1 are worse off.

But if you’re thinking about placing a long-shot bet on Popovich and co., maybe rethink that decision. The future basketball Hall of Fame inductee told reporters Monday that they shouldn’t wager on his team to win it all.

He leans into the microphone.

“…should go to Vegas and bet on this team to win the championship.”

Popovich was obviously being sarcastic. But it’s not exactly a ringing endorsement of what is a ragtag bunch of Spurs players.

He also said that he returned to coach another season because of one reason.

Pop on what drives him to return year after year: “…My paycheck.”

In fact, Popovich struggled to even nail down a starting lineup for his team.

Pop on who starts at the point: “Jakob Poeltl is our 5. We'll go from there."

He may not even know everyone on his team.

Pop admits naming everyone on the roster is tough and added he met a staff member he didn’t know. pic.twitter.com/kKu9o9vMP7

The Spurs look set to be one of the worst teams in the NBA in the 2022-23 season. But that doesn’t mean that Gregg Popovich won’t be must-see TV.