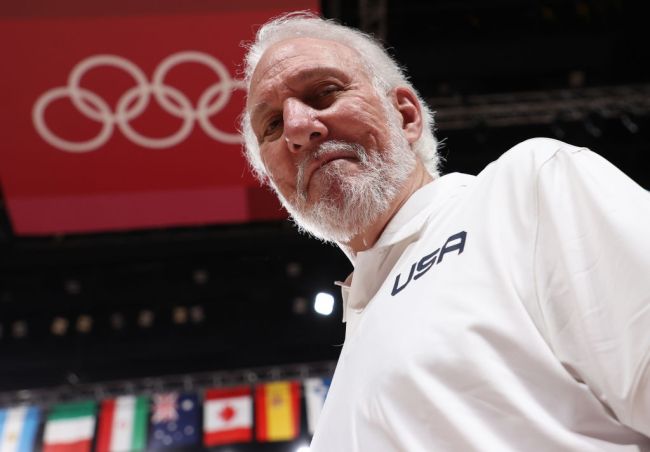 There were heavy doubts that Team USA men’s basketball and head coach Gregg Popovich might not win a gold medal. Throughout the journey to and in Tokyo, the group dealt with roster changes, meltdowns during exhibition games and defeat in its Olympic opener.

As losses started to pile up and the team looked sloppy early on, the criticism grew louder. Media, fans and players alike began to question whether Team USA could continue its dominance on the international level.

Popovich took note of those who casted doubt. He heard the comments.

Of course, the United States went on to dominate the rest of the tournament and beat France to win the gold medal anyway. After the championship game, Popovich addressed his team’s ability to overcome adversity before slamming it back at the haters.

In a video posted by Javale McGee, the USA big shed light on his time at the Olympics. He also shared a clip from Popovich’s address after winning the gold medal in Tokyo and he ended the postgame speech in amazing fashion.

“I would just like to say to all those people out there: How the f— you like us now?!”

Popovich began his postgame speech on a lighter note.

“It’s an honor to be blessed with a group of Olympic Champions and that’s what you are. I just gotta tell you I feel so fortunate having the opportunity to be with all of you guys and the staff,” Popovich said. You’ve gone through a lot. As I said at the beginning before the game started with all of the challenges you guys met, your courage and tenacity just worked right through it.”

And then he pivoted to addressing the haters. He also got emotional when he shared how proud he was to be part of a gold medal winning Olympic team for the first time.

“At the beginning, people were saying ‘why is he on the team’ or ‘you should’ve taken him’; all the pundits, all these people who think they know something. Then we started out getting our asses kicked after a couple practices… and then here comes COVID and three guys walk off the plane, a day before the game. You guys went through all of that stuff and your families are back in the [United States] sacrificing the same way. That’s why I’m so proud to be a part of this. It’s like the best feeling I’ve ever had in basketball.”

Pop ended his speech with his legendary quote.