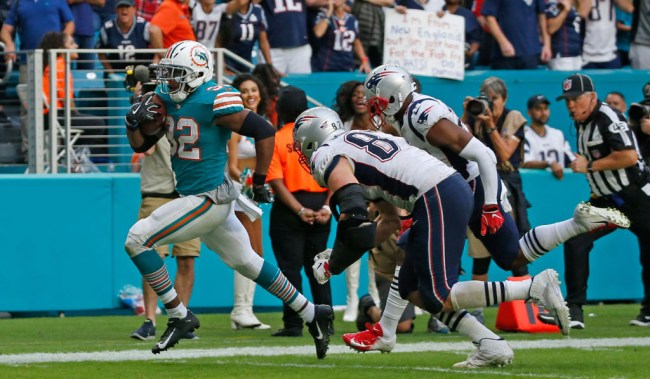 For me, 14 weeks into the 2018 NFL season, the highlight of the year has got to be Rob Gronkowski’s pitiful attempt at tackling Kenyan Drake at the goal line during the Dolphins’ insane game-winning “Miami Miracle.”

I know I will literally never get tired of watching slow-footed Gronk wandering around, looking befuddled at the 10-yard-line as Drake made his way towards him in what was most definitely an “Oh, sh*t” moment for the tight end.

When asked if Gronk should ever play defense again, her answer of “Why not?!” will probably send shivers down the spines of all New Englanders

“I mean, look what he does as a tight end. He doesn’t just catch the ball and get in the end zone. He’s blocking, he does it all,” Kostek told TMZ Sports. “So, yeah, I think I can see him doing it again! Whatever Bill wants, I trust.”

Also, Gronk could probably learn a thing or two from Kostek, as her defense against being asked if marriage was in the offing for her and Gronk was 10 times better than his effort versus the Dolphins.

“We’re so career-focused right now,” said Kostek, looking a bit uncomortable, adding, “When the time’s right, maybe he’s the one.”

If past history is any indication, that would be one hell of a wedding.