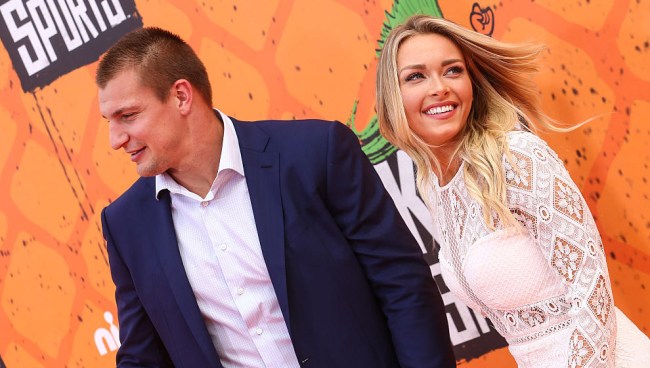 Rob Gronkowski’s girlfriend, model Camille Kostek, has been on quite a roll lately.

Last year she made the final six in Sports Illustrated’s “Swim Search” and got to appear in the magazine’s annual swimsuit issue.

This year, she spent Gronk’s offseason chilling on the beach with her man before being officially announced as an SI Swimsuit rookie for the 2019 issue. (Gronk’s reaction to that news was pure Gronk.)

So, now that she’s officially famous, Kostek is doing interviews and one of those recently took place with The Improper Bostonian. (Swipe right on the first pic below to see Gronk “reading” the issue.)

In the interview, Kostek hit on a number of topics including the SI Swimsuit issue, being a Patriots cheerleader, whether she thinks cheerleaders are objectified, and who’s prettier: Tom Brady or Julian Edelman?

She also had much to say about her love, Rob Gronkowski.

So is Gronk as big of a party monster as he seems? No. Let’s put it this way: When he parties, he parties, and he definitely lives up to the reputation. But if you think about it, he’s locked in nine months of the year in football mode. I’m used to homebody, work-mode Rob. Snuggles and movies. Once the offseason hits, we definitely have our fun times in Miami or Vegas, and he is the life of the party.

How do you deal with women throwing themselves at him? Honestly, it doesn’t really bother me. He and I both love to meet new people, and when someone comes up to either of us, we entertain them. We would never snub anyone. I have a memory of being at a club at Mohegan Sun, and he was talking to a group of girls and I was with my friends. He and I saw each other from across the room and both gave each other a thumbs up. We have each other’s backs, and we both trust each other.

Something people would be surprised to know about Gronk? That he is a teddy bear at heart. For as crazy and wild as he’s portrayed by the media, and that is him in the videos being Rockin’ Rob, but I know a very soft side of him that he shows every day.

I’d love to have been a fly on the wall in the Patriots locker room when one of his teammates read that out loud for everyone to hear. (You know it happened.)

Did they retouch Gronk’s butt for the ESPN Body Issue or those pictures in GQ? I wasn’t there but I see him in the flesh, and he’s got a great, toned, muscular booty. I mean, I’m sure they enhanced him with a little bit of body oil on the set, but what you see is what you get with him. He doesn’t need any Photoshop or booty lifts.

That would be the issue of GQ where Gronk talked about how he “gets bored” having all that sex with beautiful women.

This is our Wedding issue: Any chance there are wedding bells in your near future? I don’t know about my near future. I like to think of my life as very spontaneous and new all the time. So whenever a proposal comes into my life, I think that I’ll be very surprised, but right now, Rob and I are totally career-focused. We’re not just a fling. We definitely see a future with each other. But as of right now, there are no plans.

Considering Gronk’s completely unrealistic idea of what his perfect wife would be, she might want to keep it that way.