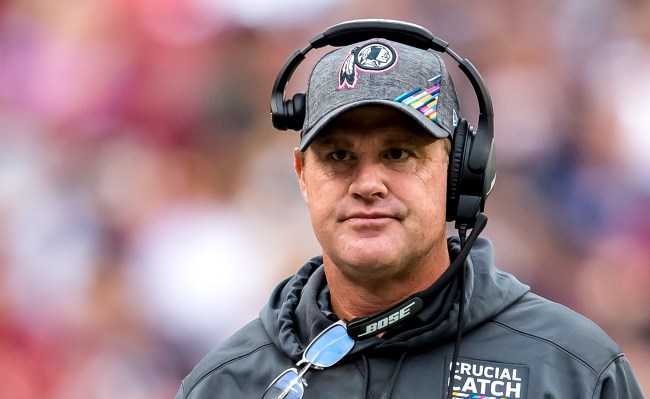 In news that will shock no one who even half paid attention to Jay Gruden’s behavior in the weeks leading up to his firing by the Washington Redskins, a new report says he wasn’t even mad that he got canned.

From accidentally trash-talking his new franchise quarterback Dwayne Haskins to his strained relationship with future Hall of Famer Adrian Peterson, Gruden appeared to have very little desire to be in Washington coaching the Redskins.

This was all but confirmed by Matt Miller of the Stick to Football podcast who said people close to Gruden told him Jay wasn’t even upset by his firing and “wanted to get outta there before it completely burnt to the ground because the stain of this team is not going to be on him, it’s going to be on Daniel Snyder and Bruce Allen, who’s the team president.”

Daniel Snyder? Not a good owner? No. Way. Sorry, I mean Mr. Snyder.

"The root of the issue is ownership… You had to address him as Mr. Snyder, even as an adult, and if you weren’t of a certain level or stature you were told not to look at the owner." pic.twitter.com/wdhcXKnvsK

Gruden told ESPN on Monday after his firing, “I can’t remember the last time all my guys played. It’s hard,” Gruden said. “The majority of our payroll, we paid a lot of money and never had guys on the field. I don’t know if many other teams can say that with so many. Some teams lose a quarterback or a tackle. We lost a quarterback, a tackle, guard, center, wide receiver or running back. That’s not easy to overcome. But we still should have been better on defense and perform better in certain areas. When you’re 0-5, 0-5 coaches don’t last very long.”

As far as his plans for the future now that he doesn’t have to deal with the headache of coaching the Redskins for Mr. Snyder?

Gruden is reportedly likely sit out at least the rest of this season and maybe more considering the Redskins will still be paying him chunks of his $5 million per year through the 2020 season.