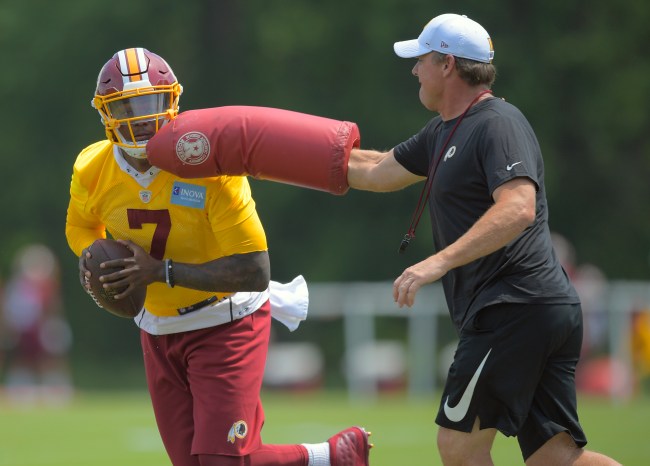 Jay Gruden probably sees the writing on the wall at this point, as his Washington Redskins continue to play pathetic football week after week. And, as his team continues to spiral downwards, it’s probably a matter of when, not if, the head coach will get canned. With just one playoff appearance in six years at the helm, and currently sitting at 0-3, that’s sort of what tends to happen in the NFL.

But if you ask Jay Gruden about this season, he’s going to tell you not to give up on his Redskins, hoping that, with 13 games left, his team might actually turn it around. Well, that’s laughable, but at least coach is trying to stay optimistic, right?

Since Gruden is (delusional?) in thinking his team can instantly become better, he’s refusing to make a switch at quarterback, maintaining that incumbent Case Keenum would continue to be the team’s starter under center. While Keenum had a crappy performance on Monday Night against the Chicago Bears — which cost a sports gambler a shot at $500,000 on an $0.89 bet — overall, his season hasn’t actually been that bad. Still, the Skins are going nowhere, so most think it’s time to get rookie Dwayne Haskins in the starting lineup to see what he can do.

Unfortunately, whether by accident or design, Jay Gruden seemed to trash his rookie signal-caller when responding to questions about the QB situation, kind of tossing him under the bus as someone who can’t give the team a spark and energy to, you know, actually win some games this season. Take a look at what the head coach said.

“Well, we’ve played three games, and there’s 13 games left in the season,” Washington coach Jay Gruden said Tuesday. “This season is not lost. It’s not over. I know everybody wants to say, ‘It’s over, and the season is over, so go ahead and play Haskins.’ We feel confident we can turn this thing around. I’m out here at practice every day. We’re out here at practice every day evaluating everybody. If we feel like Dwayne gives us the best chance to win in a coming game, we’ll definitely put Dwayne in there. If we feel like it’s Colt [McCoy] when he gets healthy, it could be Colt. Right now, we feel like it’s Case Keenum, and we’re going to move forward with him this week.”

That doesn’t exactly seem like the type of endorsement a rookie wants to hear from his head coach, does it?

If the Redskins can’t win while Keenum is playing fairly well — he’s got an even 100.0 QB rating in three games so far this year, despite the poor outing on Monday night — why not turn it over to Haskins? Probably because Jay Gruden knows his job’s on the line, so he’s most confident in putting a veteran out there rather than an inexperienced rookie. Hey, got to look out for yourself, right?

While Gruden seemed to accidentally trash his rookie signal-caller in his reply above, he did add a little bit of praise about Haskins’ work so far, but it was mostly coach speak which didn’t exactly give a ringing endorsement of the first round pick.

“I think he’s still working,” Gruden said of Haskins. “It’s hard to get him reps with the number ones because you don’t have as much practice time this time of the year. During training camp and OTAs, you can mix it up pretty equally, but when you’re trying to get a starter ready to play in a game, it is hard to get Dwayne a lot of those reps against the ones. What you’re going to see is he is mainly doing scout team right now, but he is learning in the classroom. It is new for him as it is for every rookie quarterback in the NFL that is playing right now. Some of them are doing fine, some of them are struggling a little bit, but right now I think Dwayne is on pace. He just needs to continue to sit back and learn and continue to develop.”

At this point, it’s probably best for Jay Gruden to just wave the white flag, start Dwayne Haskins to see if he can be the QB of the future and accept the fact that, regardless of who’s taking the snaps under center, he’s probably going to be out of a job in a few months anyway.