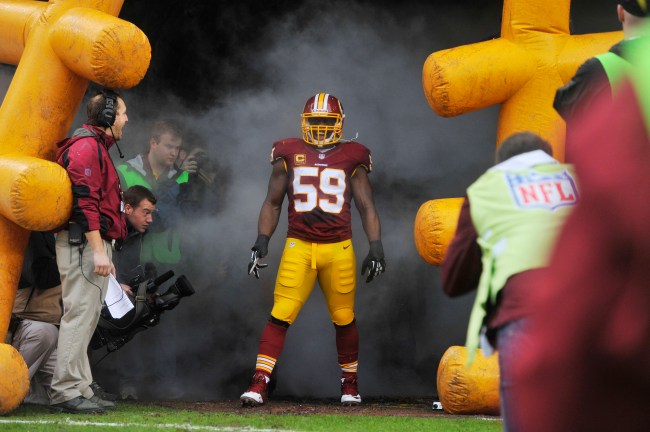 London Fletcher played one of the most grueling positions in the NFL and managed to never miss a game. He remains one of only five players in NFL history to play in over 250 consecutive games, holding the record for consecutive starts at the linebacker position.

The former Walter Payton Man of the Year nominee will go down as one of the Washington Redskins most iconic players, and the franchise attempted to pay homage to the 44-year-old at halftime of Monday night’s pitiful 31-15 loss against the Chicago Bears.

The Redskins inducted Fletcher into the team’s Ring of Honor Monday night, but in true Redskins fashion took a giant L in spelling Fletcher’s name wrong on the stadium’s screen for tens of thousands to see.

The blunder was documented by former defensive end and Walter Payton Man of the Year winner Chris Long.

What a classy organization. @Redskins can’t even spell their new ring of honor member, London Fletcher’s name right. What a joke starting from the top, Dan Snyder #Redskins #HTTR pic.twitter.com/37yLwfKtFX

You can’t spell London Fletcher without multiple L’s. This is exhibit 1,282,821 on why Dan Snyder needs to go.