Tom Brady, Edelman, And More Get Trolled By Guillermo From ‘Kimmel’ At Super Bowl Opening Night 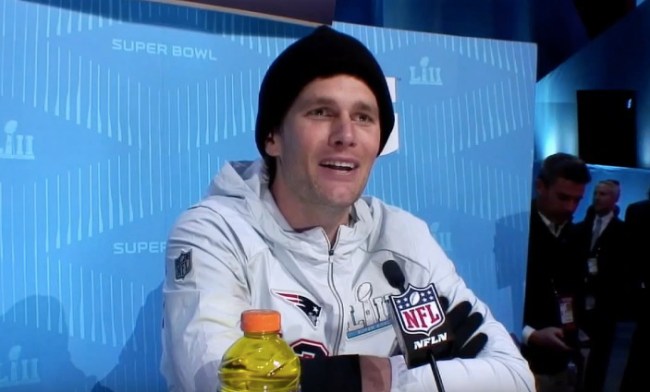 Super Bowl week officially kicks off with ‘Opening Night’ these days. It’s a media night where reporters and journalists have access to all the top players like Tom Brady and Julian Edelman. As you’ll see in the clip below, Opening Night is a total shit show with reporters screaming over each other to try and get the attention of athletes in hopes of getting a tiny blurb that might be useful.

There’s one reporter who straight up OWNS Super Bowl Opening Night and that’s Guillermo from Jimmy Kimmel Live. This year, he got Tom Brady to talk about tequila and white teeth. Edelman called him ‘bro’ and had absolutely no idea who he was. Jay Ajayai got trolled hard on his name. And he even got in a great ‘blunt’ joke with LeGarrette Blount:

The Super Bowl has morphed into an absolute media circus over time. There’s no reason that the Super Bowl should receive 100,000,000x more media coverage than the AFC and NFC championship games. Qualitatively, the matchup in the Super Bowl isn’t ever that much better than the Conference Championships. But the Super Bowl crowns the single best team in the NFL and that fuels the circus.

It’s nice to know that one reporter dominates Opening Night and that man is Guillermo. You simply won’t find a better Super Bowl Opening Night 2018 clip than this. Guillermo is the man.