Olympic Viewers Are Convinced That Robb Stark Of ‘Game Of Thrones’ Is On The U.S. Ski Team 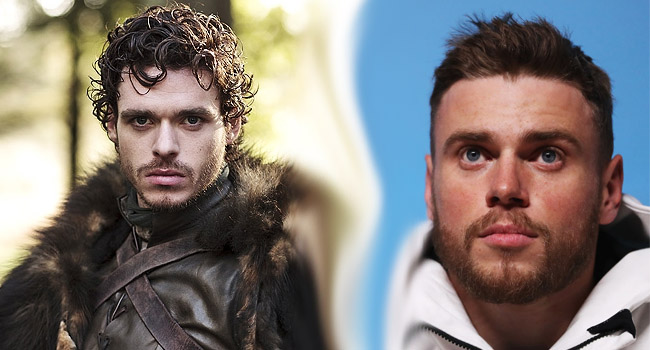 I guess when you have, hold on… 2,952 athletes competing in 102 events for 15 different sports you’re going to run into some competitors who also happen to look like famous people. We’ve already seen it twice so far with the curling doppelgangers who look like Angelina Jolie and Andy Reid. And now we have a Game of Thrones character sighting on the U.S. Ski Team.

For you see, freestyle skier Gus Kenworthy, who sadly broke his thumb in practice on Thursday, but will still compete, has many on the internet convinced
that he is, in reality, the eldest son of Eddard and Catelyn Stark, Robb Stark of Game of Thrones (played by Richard Madden). Looking at the two of them side-by-side as we can above, it’s not hard to understand why.

Kenworthy, along with figure skater Adam Rippon, are the only openly gay Olympians on the U.S. team, and have both made quite the impression thus far during the Winter Olympics. And I am not talking about how well they’ve been competing.

Rippon dropped one of the most epic interviews after his first skate, telling Mike Tirico, “I want to throw up, I want to go over to the judges and say ‘can I just have a Xanax and a quick drink?'”

While Kenworthy tweeted a picture of his broken thumb along with a dig at Vice President Mike Pence, who isn’t a big fan of LGBT rights.

Broke my thumb yesterday in practice. It won't stop me from competing (obvi) but it does prevent me from shaking Pence's hand so… Silver linings! Will be giving my teammates (and literally everyone else) an enthusiastic "thumbs up!" of encouragement the rest of the trip. pic.twitter.com/XylPPGAq9P

But back to the original point. Fans can’t seem to get over how much Kenworthy looks like Robb Stark – something the Olympian played right along with on Twitter.

Yo, but why does Gus Kenworthy look like Robb Stark? Is it me? Or is this his twin? #WinterOlympics2018

I CANNOT be the only one that thinks Richard Madden and Gus Kenworthy are long lost twins. I couldn't tell them apart if they were side by side.

Are we 100% sure that Gus Kenworthy isn't Robb Stark/Richard Madden? Has anyone ever seen them in a room together? https://t.co/BQJBh1Qf5f

Guys I think Robb Stark is actually a US Olympic Skier pic.twitter.com/tKYizLGQ7I

These are literally 2 different people. I am still mind blown, like wut @_richardmadden @guskenworthy

Side by side of kenworthy and Richard madden pic.twitter.com/I0QOhqwXGA

So you're telling me that Gus Kenworthy and Richard Madden aren't the same guy?!? pic.twitter.com/T2Pckq73TH

You guys, @_richardmadden IS @guskenworthy doppelgänger! This is nuts! pic.twitter.com/jtf116V20s