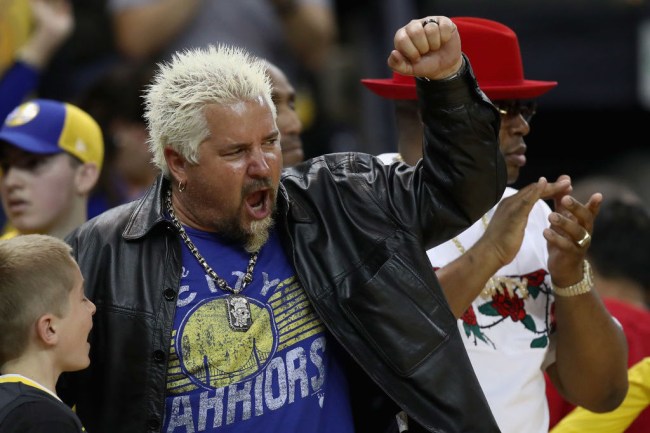 Kevin Durant is currently in the final year of his contract with the Golden State Warriors and rumors concerning his future have been swirling since the beginning of the year and have kicked into high gear as the season slowly inches to a close much to the chagrin of the superstar.

Durant has previously called out journalists for constantly speculating about where he might end up signing—if you can even call Stephen A. Smith a journalist—and while television’s most egregiously ill-informed talking head believes KD is headed to the Clippers, the consensus seems to be he’s planning on taking his talents to New York City and donning a Knicks uniform.

Regardless of where he ultimately ends up playing, most people agree it won’t be in the Bay Area but that doesn’t mean Warriors fans aren’t trying their darndest to keep him from leaving the team—including diehard supporter Guy Fieri.

The Mayor of Flavortown can frequently be seen sitting courtside at Warriors game occasionally accompanied by E-40, which is as unlikely a pairing as Meek Mill and Robert Kraft.

Fieri was recently the subject of a fantastic profile by GQ that gave us an in-depth look at the world’s biggest fan of yellow Oakleys and flame-covered bowling shirts. In the article, he expressed his love for Durant and said he’s willing to do whatever it takes to keep him in the Bay Area—including whipping up a meal you can put on a flip-flop:

“Call me, KD. Tell me what you need. If there is a such thing as an inspiration dinner that I need to cook to bring all the dignitaries together—all the players, his team, his mom, you name it—well, consider that meal cooked.”

If that doesn’t convince KD to stay, I don’t know what will.