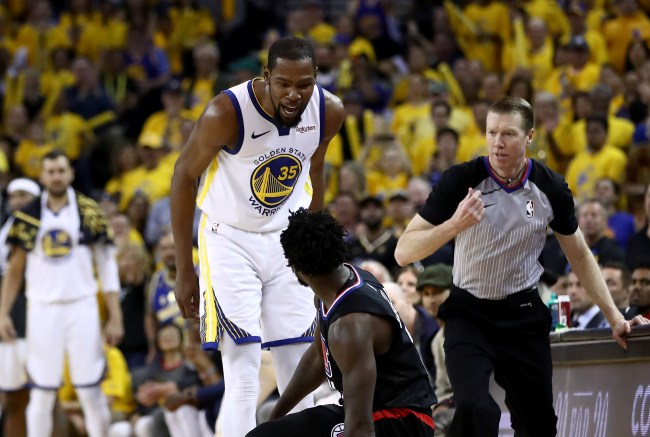 Kevin Durant hears all those free-agency rumors floating around out there, and he’s got a simple message for people who keep brining them up: “just watch the game.” Durant, who will be the premier free agent in this summer’s class, might have a good thing going with the Golden State Warriors — who are on a quest to win their third-straight championship since Durant signed with the team in the summer of 2016 — but that hasn’t stopped people from speculating where the former league MVP will be headed this offseason, with the New York Knicks the hottest rumor, with some league sources even going as far as saying it’s a done deal.

While Kevin Durant has always tried to silence those rumors and shoot down those questions about his upcoming free-agency, they continue to come his way — especially now as the NBA Playoffs march on. While those things are good for fans and media to talk about, Durant clapped back at all the speculation to Marc J. Spears of The Undefeated, reminding people that he can’t do anything until this summer, so just enjoy what’s going on right now.

“Yo, just watch the game. Just focus on the game and stop nitpicking, because it is a beautiful game going on out there,” Durant told The Undefeated. “What can I do right now? I can’t sign a paper. I got to do the most important thing, and that is play. And that is what we should be focusing on.”

“Let’s appreciate what is going on, on the basketball court. I know it’s the sexy part of the NBA: free agency, trades, transactions. But it’s a beautiful game that we’re out here playing. I feel like I play a different and unique way that may inspire some people,” Durant said. “You never know where you can get [inspiration] from. It’s always been my fight with people to focus on the basketball. That other stuff will take care of itself when time comes.”

“If I already made a decision, it would take away from the team, what we’re fighting for. Every play would be overshadowed by it,” Durant said. “It is not necessary for me to make a decision right now. It would be bad to do that. It would take the focus off of what is important. I would never want to put my teammates in a messed-up position. I want to forget about it.

“But it is still putting everybody in messed-up positions where everybody wants to know all the time, everybody is speculating and everybody is trying to get in my head and what I think about it.”

That’s about as open as Kevin Durant will get about this whole free-agency thing, and it’s kind of refreshing to see, because, in the past, the guy has gone in on the media and anyone who even suggests he’s playing his last season with the Warriors. So the fact that he’s playing the “wait and see” and pragmatic card is a good approach.

As for any speculation about him leaving after this season, well, Kevin Durant also offered his thoughts on playing in the Bay Area, which, in his words, reminds him of home. So maybe we shouldn’t be so quick to think that he’s already focused on playing elsewhere just yet.

“It’s a place where you can blend in,” Durant said. “I always wanted to blend in and do my thing. I’ve lived in a couple places here in the Bay. Moving around and seeing the people here, I can relate to everybody here. When I drive around Oakland, I feel like I am in Maryland and D.C. Then when I go to the city [San Francisco], it feels like I am in the heart of Washington, D.C.

“It reminds me so much of home. That is what made me really comfortable, especially moving to San Francisco last year. It has made me comfortable because it’s the same style, same core life as back at home.”

Oh, yeah, then there’s this little tidbit about having his No. 35 jersey retired by the Golden State Warriors one day, which, if we’re being honest, probably doesn’t happen down the line if he only play three seasons for the team.

“Most definitely,” Durant said. “If you put a Durant ‘35’ jersey in any NBA arena coming from where I come from … that is why that stuff is important to me, because my family name will be here after I am dead. To have that hanging in the arena with one of the best franchises in sports, hell, yeah, that’s a goal.”

Who knows what’s going to happen in the future, but it sure sounds as if Kevin Durant still has a lot of interest in staying with the Warriors and chase championships. Will that happen? Who knows? But these latest comments are interesting about where his mind’s at right now.