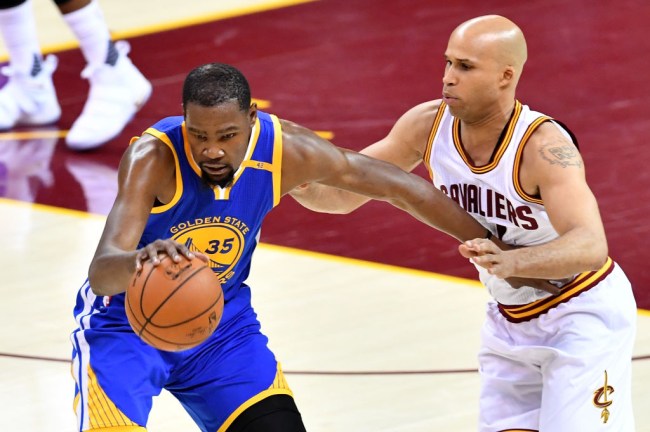 On Sunday, the Warriors secured the top spot in the Western Conference yet again and are far and away the favorites to take home an NBA title for the third year in a row thanks to a roster that just isn’t fair.

Golden State was already doing pretty well for itself when it “only” had Steph Curry, Klay Thompson, and Draymond Green at its disposal but they took things to the next level when they decided to bring Kevin Durant on board.

While the addition may have caused their team chemistry to take a hit, the superteam is still playing filthy basketball. However, not everyone is pleased with the strategy they’ve harnessed to achieve the success that they have.

On Sunday, Richard Jefferson appeared on a broadcast during a Cavaliers game and called out the Warriors for bringing Durant into the fold after losing the NBA Finals in 2016.

“Where I come from in the park and on the street, if you’re playing and you lose to somebody, the first words are ‘Run it back, same teams. … We felt like we’re the better team, we just didn’t play well enough, so let’s run it back.’ They didn’t do that. They were like, ‘We need to go reload. We’re gonna go get our big brother.’”

Durant has never been one to restrain himself when it comes to social media and it didn’t take long for him to fire back in the comments.

Kevin Durant can be hilarious on the Internets 🙂 pic.twitter.com/y78hGYRm9m

Jefferson replied in kind with a response of his own where he made it clear he respects KD’s skills and was more focused on criticizing the Warriors for taking what he perceived was the easy way out.

Much respect to Richard Jefferson. pic.twitter.com/lrDOuI4bNg

Why can’t we all just get along?